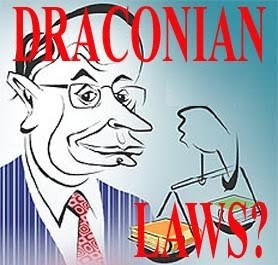 Lok Morcha Punjab strongly condemns the enactment of Unlawful Activities Prevention Amendment Act-2012, making the UAPA-1967 more repressive, sinister & draconian. Under the provisions of amending Act, which has been passed without any worthwhile debate in the Lok Sabha or Rajya Sabha, the following anti-people features have been added to it :-


The definition of “terrorist act” has been broadened to bring in its sphere the peoples activities and struggles against anti-people, anti-national & pro-imperialist neo-liberal economic policies, by including “economic security” in S.15 of the principal Act and terming any act threatening it as a “terrorist act”. To our rulers, those who are looting the national exchequer through corrupt & dubious means; who are indulging in black-marketeering, profiteering, hoarding, multi-crore scams, accumulating black-money; selling coal-blocks, oil-fields, telecom spectrum, mines and minerals etc to MNCs and their Indian agents for a pittance, do not pose any threat to the “economic security” of this country.  But people struggling to oppose land acquisition for big projects; demanding better wages and security of service for industrial workers; remunerative prices for farm produce; land, forest & fishing rights for the poor; opposing casualisation, contractualisation & outsourcing in industry & Govt jobs; are now to be charged with threatening “economic security” of India and thus indulging in “terrorist act”, punishable under the UAPA.


The sweep and potential for mischief and misuse of the UAPA, has been greatly enhance by altering the definition of “person”. Now a family, a company, a firm, an association of persons or body of individuals – whether incorporated or not, every artificial juridical person, any agency, office or branch owned or controlled by any of the above have been included in the definition of ‘person’, thus broadening the deadly sweep of this draconian Act. Now even discussions amongst family members, loose groups of individuals, groups of people on Face-book, Twitter or other social-sites, can be found posing danger to the ‘unity, integrity, security, economic security & sovereignty of India' and these can be branded as “unlawful” or “terrorist organizations” under the amended UAPA and subjected to ban & criminal proceedings.


The period for which the ban on any organization dubbed as “unlawful” has been extended from 2 to 5 years by amending Section 6 of the principal Act.


With this amended Act, India has formally joined the imperialist initiated “war on terror”, which in fact is a war by overt or covert means to plunder the natural resources and national wealth of the poor and under-developed countries. Offenses mentioned under various treaties/ conventions, imposed by imperialist countries under the leadership of USA to protect their Civil Aviation, maritime navigation, Fixed Platforms located on the continental Shelf, nuclear installations, diplomatic personnel etc., have also been made offense under the UAPA by inserting Section 15(2) and the Second Schedule in the principal Act. The Central Govt has been authorized to add new treatises to this schedule through notification. With the increased control of corporates over the Govt and the “Economic Security” already having been given pre-eminent position, treaties protecting foreign investment, assets and plunder by MNCs may also find place in the Second Schedule.


By amending S.17 of the principal Act, participating, organizing or directing in raising or collecting or providing funds in any manner “for the benefit of, or, to an individual terrorist”, terrorist gang or terrorist organization for any purpose, has been made an offense under this Act. Thus even providing humanitarian, medical or legal aid to anyone accused of “unlawful activities” or “terrorist act,” has become an offense. Similarly, in case of false implication under UAPA, anyone espousing the cause of victims, can be accused of providing funds for the benefit of a terrorist and hauled up in jail.


Provisions regarding forfeiture of properties of the persons accused of ‘unlawful activities’ or ‘terrorist acts’ have been made more stringent. Now the courts have been invested with the powers to forfeit the properties of such persons, even in cases where the trial is not completed due to death of such persons. The proceedings against them shall not abate on their death.


The amending Act has been passed at a time when democratic rights organizations and vast sections of the Indian people are demanding repeal of such black-laws, as Armed Forces Special Powers Act (AFSPA), U.A.P.A, Section 124-A IPC (Sedition), Section 121 IPC (Waging war against the Govt) etc.  It exposes the autocratic, undemocratic, repressive and anti-people character of our rulers. We have seen from our experience that these black-laws have been used to suppress peoples’ movements against repression & exploitation; to crush their struggles for protecting country’s natural resources from imperialist plunder. All the struggling sections of the people should come forward to oppose and defeat these black-laws.