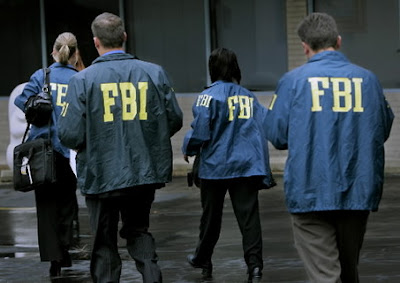 Students for a Democratic Society (SDS) stand in solidarity with their brothers and sisters across the country in the face of FBI repression of progressive causes. SDSers, along with members of the Palestine Solidarity Group, the Twin-Cities Anti-War Committee, the Colombia Action Network, the Freedom Road Socialist Organization, and the National Committee to Free Ricardo Palmera had their homes searched and documents and electronic devices seized.

“The government hopes to use a grand jury to frame up activists. The goal of these raids is to harass and try to intimidate the movement against U.S. wars and occupations, and those who oppose U.S. support for repressive regimes,” said Colombia solidarity activist Tom Burke, one of those handed a subpoena by the FBI. “They are designed to suppress dissent and free speech, to divide the peace movement, and to pave the way for more U.S. military intervention in the Middle East and Latin America.”

Grace Kelley, an SDSer from the University of Minnesota, said “SDS at the U of M condemns the terror tactics used by the FBI to silence activists who organize against wars and for peace here in Minneapolis as well as across the nation. Tracy Molm from SDS at U of M was one of the activists whose house was raided. SDSers across the country need to stand up and condemn these raids and say that we will not be scared into silence, that we will continue to stand up and fight for what’s right”.

Several activists in Minnesota and Chicago have had papers, CDs, and cell phones stolen among other items; as well as being issued subpoenas to appear before a federal grand jury. The FBI are apparently looking for evidence linking activists to “material support of terrorism” specifically liberation struggles in Colombia and Palestine. In addition to SDSers being harassed in Minneapolis, two SDSers in Milwaukee were also contacted by the FBI about their anti-war activism.

The activists involved have done nothing wrong and are refusing to be pulled into conversations with the FBI about their political views or organizing against war and occupation. No arrests have been made – make no mistake, this is a fishing expedition by the FBI.

We urge all progressive activists to show solidarity with those individuals targeted by the U.S. Government. Activists have the right not to speak with the FBI and are encouraged to politely refuse – just say “No”.

Show your support! Organize solidarity actions in your city demanding that the FBI halt all searches and seizures against progressive activists who have done nothing wrong. Contact your local media and let them know that we will not tolerate this kind of harassment from the government. And be aware – if the FBI knocks, you do not have to give out any information or answer any questions.