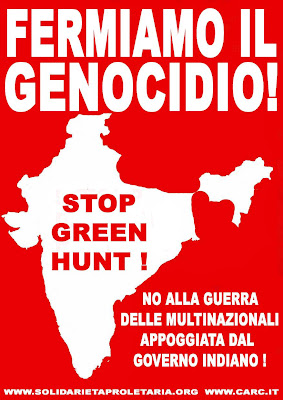 PAOLO FERRERO, SECRETARY OF THE PARTY OF THE COMMUNIST REFOUNDATION, DENOUNCES THE BARBARITY OF THE OPERATION

The Association For Proletarian Solidarity intervened at the Feast of Liberazione in Susa Valley, with an important operation of propaganda against the Operation Green Hunt, exposing posters and releasing the book Walking with the Comrades, with writings of Arundathi Roy and G.N. Saibaba, vice – president of del Revolutionary Democratic Front of India.

The book was given also to Paolo Ferrero, Secretary of the Party of the Communist Refoundation, who was there. Ferrero held a meeting with about 700 people. While speaking of capitalist exploitation by capitalism in Italy and alla round the world he talked about the genocide of the peoples of India as an example of the barbarity of capitalism on the world level.

The campaign against the Operation Green Hunt goes on all around the world, and the Indian State has been obliged to take steps back. In August it blocked the project of a bauxite mine in Orissa by the British company Vedanta, conceding that such project damage human rights and the environment. Amnesty International declared that this victory is a landmark in the defence of indigenous communities’ human rights.

We thank the Association For Proletarian Solidarity and Paolo Ferrero for the important contribution they give to the campaign against the war of extermination and the environmental devastation the Indian government is carrying out against the people and the land. We invite you to continue and to extend your commitment together with our Committee and the initiatives multiplying in our country against Operation Green Hunt.