The Mass Line in China - Quotations from Mao Zedong 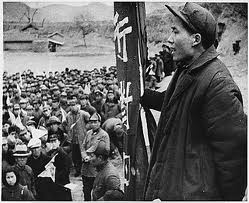 The people, and the people alone, are the motive force in the making of world history.

The masses are the real heroes, while we ourselves are often childish and ignorant, and without this understanding it is impossible to acquire even the most rudimentary knowledge.

The masses have boundless creative power. They can organize themselves and concentrate on places and branches of work where they can give full play to their energy; they can concentrate on production in breadth and depth and create more and more undertakings for their own well-being.

Introductory note to "Surplus Labour Has Found a Way Out" (1955), The Socialist Upsurge in China's Countryside, Chinese ed., Vol. II

The present upsurge of the peasant movement is a colossal event. In a very short time, in China's central, southern and northern provinces, several hundred million peasants will rise like a mighty storm, like a hurricane, a force so swift and violent that no power, however great, will be able to hold it back. They will smash all the trammels that bind them and rush forward along the road to liberation. They will sweep all the imperialists, warlords, corrupt officials, local tyrants and evil gentry into their graves. Every revolutionary party and every revolutionary comrade will be put to the test, to be accepted or rejected as they decide. There are three alternatives. To march at their head and lead them? To trail behind them, gesticulating and criticizing? Or to stand in their way and oppose them? Every Chinese is free to choose, but events will force you to make the choice quickly.

The high tide of social transformation in the countryside, the high tide of co-operation, has already reached some places and will soon sweep over the whole country. It is a vast socialist revolutionary movement involving a rural population of more than 500 million, and it has extremely great and world-wide significance. We should give this movement active, enthusiastic and systematic leadership, and not drag it back by one means or another. Some errors are unavoidable in the process; this is understandable, and they will not be hard to correct. Shortcomings or mistakes among cadres and peasants can be remedied or overcome provided we give them positive help.


The masses have a potentially inexhaustible enthusiasm for socialism. Those who can only follow the old routine in a revolutionary period are utterly incapable of seeing this enthusiasm. They are blind and all is dark ahead of them. At times they go so far as to confound right and wrong and turn things upside down. Haven't we come across enough persons of this type? Those who simply follow the old routine invariably underestimate the people's enthusiasm. Let something new appear and they always disapprove and rush to oppose it. Afterwards, they have to admit defeat and do a little self-criticism. But the next time something new appears, they go through the same process all over again. This is their pattern of behaviour in regard to anything and everything new. Such people are always passive, always fail to move forward at the critical moment, and always have to be given a shove in the back before they move a step.

For over twenty years our Party has carried on mass work every day, and for the past dozen years it has talked about the mass line every day. We have always maintained that the revolution must rely on the masses of the people, on everybody's taking a hand, and have opposed relying merely on a few persons issuing orders. The mass line, however, is still not being thoroughly carried out in the work of some comrades; they still rely solely on a handful of people working coolly and quietly by themselves. One reason is that, whatever they do, they are always reluctant to explain it to the people they lead and that they do not understand why or how to give play to the initiative and creative energy of those they lead. Subjectively, they too want everyone to take a hand in the work, but they do not let other people know what is to be done or how to do it. That being the case, how can everyone be expected to get moving and how can anything be done well? To solve this problem the basic thing is, of course, to carry out ideological education on the mass line, but at the same time we must teach these comrades many concrete methods of work.

To link oneself with the masses, one must act in accordance with the needs and wishes of the masses. All work done for the masses must start from their needs and not from the desire of any individual, however well-intentioned. It often happens that objectively the masses need a certain change, but subjectively they are not yet conscious of the need, not yet willing or determined to make the change. In such cases, we should wait patiently. We should not make the change until, through our work, most of the masses have become conscious of the need and are willing and determined to carry it out. Otherwise we shall isolate ourselves from the masses. Unless they are conscious and willing, any kind of work that requires their participation will turn out to be a mere formality and will fail. . . . There are two principles here: one is the actual needs of the masses rather than what we fancy they need, and the other is the wishes of the masses, who must make up their own minds instead of our making up their minds for them.

Our congress should call upon the whole Party to be vigilant and to see that no comrade at any post is divorced from the masses. It should teach every comrade to love the people and listen attentively to the voice of the masses; to identify himself with the masses wherever he goes and, instead of standing above them, to immerse himself among them; and, according to their present level, to awaken them or raise their political consciousness and help them gradually to organize themselves voluntarily and to set going all essential struggles permitted by the internal and external circumstances of the given time and place.

In all the practical work of our Party, all correct leadership is necessarily "from the masses, to the masses". This means: take the ideas of the masses (scattered and unsystematic ideas) and concentrate them (through study turn them into concentrated and systematic ideas), then go to the masses and propagate and explain these ideas until the masses embrace them as their own, hold fast to them and translate them into action, and test the correctness of these ideas in such action. Then once again concentrate ideas from the masses and once again go to the masses so that the ideas are persevered in and carried through. And so on, over and over again in an endless spiral, with the ideas becoming more correct, more vital and richer each time. Such is the Marxist theory of knowledge.

There are people in our leading organs in some places who think that it is enough for the leaders alone to know the Party's policies and that there is no need to let the masses know them. This is one of the basic reasons why some of our work cannot be done well.

In all mass movements we must make a basic investigation and analysis of the number of active supporters, opponents and neutrals and must not decide problems subjectively and without basis.

The masses in any given place are generally composed of three parts, the relatively active, the intermediate and the relatively backward. The leaders must therefore be skilled in uniting the small number of active elements around the leadership and must rely on them to raise the level of the intermediate element and to win over the backward elements.

To be good at translating the Party's policy into action of the masses, to be good at getting not only the leading cadres but also the broad masses to understand and master every movement and every struggle we launch -- this is an art of Marxist-Leninist leadership. It is also the dividing line that determines whether or not we make mistakes in our work.

However active the leading group may be, its activity will amount to fruitless effort by a handful of people unless combined with the activity of the masses. On the other hand, if the masses alone are active without a strong leading group to organize their activity properly, such activity cannot be sustained for long, or carried forward in the right direction, or raised to a high level.

Inscription for a production exhibition sponsored by the organizations directly under the Central Committee of the Party and the General Headquarters of the Eighth Route Army, Liberation Daily of Yenan, November 24, 1943.

We should pay close attention to the well-being of the masses, from the problems of land and labour to those of fuel, rice, cooking oil and salt. . . . All such problems concerning the well-being of the masses should be placed on our agenda. We should discuss them, adopt and carry out decisions and check up on the results. We should help the masses to realize that we represent their interests, that our lives are intimately bound up with theirs. We should help them to proceed from these things to an understanding of the higher tasks which we have put forward, the tasks of the revolutionary war, so that they will support the revolution and spread it throughout the country, respond to our political appeals and fight to the end for victory in the revolution.