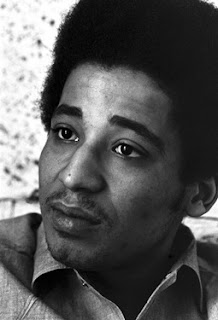 The George Jackson Socialst League, The Pan Afrikan Community Forum invite you to the Karibu Centre Brixton to remember and celebrate the the life of George Jackson .

To most readers in this continent, starved of authentic information by the imperialist news agencies, the name of George Jackson is either unfamiliar or just a name. The powers that be in the United States put forward the official version that George Jackson was a dangerous criminal kept in maximum security in Americas toughest jails and still capable of killing a guard at Soledad Prison. They say that he himself was killed attempting escape this year in August. Official versions given by the United States of everything from the Bay of Pigs in Cuba to the Bay of Tonkin in Vietnam have the common characteristic of standing truth on its head. George Jackson was jailed ostensibly for stealing 70 dollars. He was given a sentence of one year to life because he was black, and he was kept incarcerated for years under the most dehumanizing conditions because he discovered that blackness need not be a badge of servility but rather could be a banner for uncompromising revolutionary struggle. He was murdered because he was doing too much to pass this attitude on to fellow prisoners. George Jackson was political prisoner and a black freedom fighter. He died at the hands of the enemy.

Once it is made known that George Jackson was a black revolutionary in the white mans jails, at least one point is established, since we are familiar with the fact that a significant proportion of African nationalist leaders graduated from colonialist prisons, and right now the jails of South Africa hold captive some of the best of our brothers in that part of the continent. Furthermore, there is some considerable awareness that ever since the days of slavery the U.S.A. is nothing but a vast prison as far as African descendants are concerned. Within this prison, black life is cheap, so it should be no surprise that George Jackson was murdered by the San Quentin prison authorities who are responsible to Americas chief prison warder, Richard Nixon. What remains is to go beyond the generalities and to understand the most significant elements attaching to George Jacksons life and death.

When he was killed in August this year, George Jackson was twenty nine years of age and had spent the last fifteen [correction: 11 years] behind bars—seven of these in special isolation. As he himself put it, he was from the lumpen. He was not part of the regular producer force of workers and peasants. Being cut off from the system of production, lumpen elements in the past rarely understood the society which victimized them and were not to be counted upon to take organized revolutionary steps within capitalist society. Indeed, the very term lumpen proletariat was originally intended to convey the inferiority of this sector as compared with the authentic working class.


Yet George Jackson, like Malcolm X before him, educated himself painfully behind prison bars to the point where his clear vision of historical and contemporary reality and his ability to communicate his perspective frightened the U.S. power structure into physically liquidating him. Jacksons survival for so many years in vicious jails, his self-education, and his publication of Soledad Brother were tremendous personal achievements, and in addition they offer on interesting insight into the revolutionary potential of the black mass in the U.S.A., so many of whom have been reduced to the status of lumpen.

Under capitalism, the worker is exploited through the alienation of part of the product of his labour. For the African peasant, the exploitation is effected through manipulation of the price of the crops which he laboured to produce. Yet, work has always been rated higher than unemployment, for the obvious reason that survival depends upon the ability to obtain work. Thus, early in the history of industrialization, workers coined the slogan the right to work. Masses of black people in the U.S.A. are deprived of this basic right. At best they live in a limbo of uncertainty as casual workers, last to be hired and first to be fired. The line between the unemployed or criminals cannot be dismissed as white lumpen in capitalist Europe were usually dismissed.

The latter were considered as misfits and regular toilers served as the vanguard. The thirty-odd million black people in the U.S.A. are not misfits. They are the most oppressed and the most threatened as far as survival is concerned. The greatness of George Jackson is that he served as a dynamic spokesman for the most wretched among the oppressed, and he was in the vanguard of the most dangerous front of struggle.

Jail is hardly an arena in which one would imagine that guerrilla warfare would take place. Yet, it is on this most disadvantaged of terrains that blacks have displayed the guts to wage a war for dignity and freedom. In Soledad Brother, George Jackson movingly reveals the nature of this struggle as it has evolved over the last few years. Some of the more recent episodes in the struggle at San Quentin prison are worth recording. On February 27th this year, black and brown (Mexican) prisoners announced the formation of a Third World Coalition. This came in the wake of such organizations as a Black Panther Branch at San Quentin and the establishment of SATE (Self-Advancement Through Education). This level of mobilisation of the nonwhite prisoners was resented and feared by white guards and some racist white prisoners. The latter formed themselves into a self-declared Nazi group, and months of violent incidents followed. Needless to say, with white authority on the side of the Nazis, Afro and Mexican brothers had a very hard time. George Jackson is not the only casualty on the side of the blacks. But their unity was maintained, and a majority of white prisoners either refused to support the Nazis or denounced them. So, even within prison walls the first principle to be observed was unity in struggle. Once the most oppressed had taken the initiative, then they could win allies.

The struggle within the jails is having wider and wider repercussions every day. Firstly, it is creating true revolutionary cadres out of more and more lumpen. This is particularly true in the jails of California, but the movement is making its impact felt everywhere from Baltimore to Texas. Brothers inside are writing poetry, essays and letters which strip white capitalist America naked. Like the Soledad Brothers, they have come to learn that sociology books call us antisocial and brand us criminals, when actually the criminals are in the social register. The names of those who rule America are all in the social register.

Secondly, it is solidifying the black community in a remarkable way. Petty bourgeois blacks also feel threatened by the manic police, judges and prison officers. Black intellectuals who used to be completely alienated from any form of struggle except their personal hustle now recognize the need to ally with and take their bearings from the street forces of the black unemployed, ghetto dwellers and prison inmates.

Thirdly, the courage of black prisoners has elicited a response from white America. The small band of white revolutionaries has taken a positive stand. The Weathermen decried Jacksons murder by placing a few bombs in given places and the Communist Party supported the demand by the black prisoners and the Black Panther Party that the murder was to be investigated. On a more general note, white liberal America has been disturbed. The white liberals never like to be told that white capitalist society is too rotten to be reformed. Even the established capitalist press has come out with esposes of prison conditions, and the fascist massacres of black prisoners at Attica prison recently brought Senator Muskie out with a cry of enough.

Fourthly (and for our purposes most significantly) the efforts of black prisoners and blacks in America as a whole have had international repercussions. The framed charges brought against Black Panther leaders and against Angela Davis have been denounced in many parts of the world. Committees of defense and solidarity have been formed in places as far as Havana and Leipzig. OPAAL declared August 18th as the day of international solidarity with Afro-Americans; and significantly most of their propaganda for this purpose ended with a call to Free All Political Prisoners.

For more than a decade now, peoples liberation movements in Vietnam, Cuba, Southern Africa, etc., have held conversations with militants and progressives in the U.S.A. pointing to the duality and respective responsibilities of struggle within the imperialist camp. The revolution in the exploited colonies and neo-colonies has as its objective the expulsion of the imperialists: the revolution in the metropolis is to transform the capitalist relations of production in the countries of their origin. Since the U.S.A. is the overlord of world imperialism, it has been common to portray any progressive movement there as operating within the belly of the beast. Inside an isolation block in Soledad or San Quentin prisons, this was not merely a figurative expression. George Jackson knew well what it meant to seek for heightened socialist and humanist consciousness inside the belly of the white imperialist beast.

International solidarity grows out of struggle in different localities. This is the truth so profoundly and simply expressed by Che Guevara when he called for the creation of one, two, three - many Vietnams. It has long been recognized that the white working class in the U.S.A is historically incapable of participating (as a class) in anti-imperialist struggle. White racism and Americas leading role in world imperialism transformed organized labour in the U.S. into a reactionary force. Conversely, the black struggle is internationally significant because it unmasks the barbarous social relations of capitalism and places the enemy on the defensive on his own home ground. This is amply illustrated in the political process which involved the three Soledad Brothers—George Jackson, Fleeta Drumgo and John Clutchette—as well as Angela Davis and a host of other blacks now behind prison bars in the U.S.A.

George Jackson also authored Blood In My Eye which was published posthumously, or after this article was written.