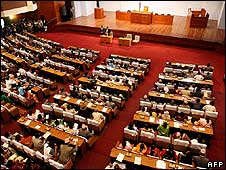 There appears to be no end to the political uncertainty in Nepal as R C Poudyal of Nepali Congress failed to get majority support in Parliament in the Prime Ministerial election for the eighth time in a row on Sunday even after Maoist chairman Prachanda withdrew from the race.

Ahead of the voting in the 601-member Constituent Assembly, the House officially approved the withdrawal of Prachanda’s candidacy, leaving Nepali Congress (NC) candidate Poudyal alone in the fray.

65-year-old Poudyal received 116 votes in his favour, 184 votes short of a simple majority. Seventy-one lawmakers stayed neutral, while the remaining members did not participate in the voting process, the nepalnews online said.

The next round of voting will be on September 30.

Following his failure to get majority support in Parliament seven times in a row, the Maoist chief on September 17 withdrew from the prime ministerial election after a deal with the CPN-UML in bid to facilitate the formation of a national consensus government.