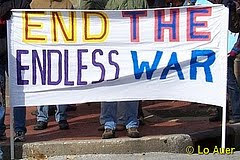 The British Parliament will debate the war in Afghanistan next week against the background of claims by the politicians and military waging war that the invading armies are "making progress".

Twenty-one US soldiers were killed over last weekend -- adding to the number killed this year, which is fast approaching the total for the whole of 2009. This exposes the reality in Afghanistan, as do the continually rising numbers of Afghan civilians being killed at a higher rate than in any previous year of the war.

Stop the War has organised a public meeting in the House of Commons the day before MPs debate the Afghan war. The title will be Afghanistan: Time To Go, and the speakers will include MPs

Caroline Lucas, Jeremy Corbyn and Paul Flynn, who will be joined by Joan Humphries, from Military Families Against the War, whose grandson was killed in Afghanistan.

The meeting is part of the campaign mobilising support for the Afghanistan: Time To Go national demonstration in London on 20 November.