Breizhistance: The Struggle for Independence and Socialism in Brittany 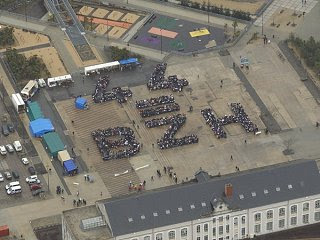 Sometimes it is easy to slip into self-doubt and wonder whether the struggle for an independent and socialist Ireland is an impossible task.

One of the easiest ways to overcome any doubts or questions is to look at similar struggles being fought throughout the world. In recent years, many activists have become well informed on the struggles in Venezuela, Palestine and the Basque Country. Another, less reported struggle is that of the people of Brittany.

In this fellow Celtic country, many activists are drawing similar conclusions to those of many in Ireland – they are organising not only for independence but also for socialism.

Less than a year ago, over the weekend of October 24-25 2009, left-wing supporters of independence for Brittany met in conference. After substantial deliberations, a new organisation was formed: Breizhistance-Socialist Party of Brittany. The new organisation announced the appointment of a national directorate and that a meeting would be held in public to announce its 100 Proposals for an Alternative Brittany. At this meeting, attended by over 60 people, the new proposals were launched alongside the public launch of this new political initiative.

The proposals centred on demands for a democratic process in all of Britanny to allow for self determination, as well as on how the economy can be transformed in order to redistribute the wealth of the nation equitably.

After this presentation of its political programme, Breizhistance quickly demonstrated that it was not to be just a party of theory. On November 11 2009, around 30 activists gathered outside the French Army recruitment office in Rennes to protest against the presence of a foreign army in Brittany and in other occupied countries such as Afghanistan. November 11 in France is officially a day of remembrance for those who died in WW1 but the protestors highlighted the fact that, instead of just remembering the dead, the day was used to sanitise old imperial adventures and justify present day imperialist activities by the French state.

In the months that have passed, Breizhistance has built on these initial steps and has become central to the struggle for independence and socialism in Brittany. With a focus on popular mobilisation around the area of national rights, Breizhistance has remained consistently active
.

In the French state at present the ruling UMP [Union pour un Mouvement Populaire] has started a debate on the issue of “national identity” because it fears the recent resurgence of what it calls “regionalism”.

The people of Brittany, the Basque Country, Corsica and Martinique who find their countries occupied by the French state obviously have a huge issue with the idea that inspires the ‘national identity’ since it calls into question their very existence as nations.

As part of the French jingoistic debate, 12 public meetings were scheduled to take place in Brittany. The first was arranged for Guingamp on Monday, December 17 at 5pm. The day, the proximity of the date to Christmas and time were all designed to ensure that the ability of protestors to upset this showpiece for the French state would be limited. Breizhistance, only a few months in existence, called a protest and, at short notice, mobilised over 100 activists. Consequently, the meeting was officially postponed while one planned for Nantes was cancelled.

One of the major nationalist campaigns in recent years in Brittany is entitled ‘44 = BZH’. [BZH is short for Breizh, which is the name for Brittany in the Breton language]. This campaign sees the slogan displayed everywhere all over the country – on stickers, posters, graffiti and items of clothing. The message is simple. The 44 counties of Brittany make up the country and the French occupation and partition of it into different regional administration sections doesn’t alter this fact.

On March 1 this year, an interesting method of getting the message across was organised in a public square in Nantes. Around 2,000 people, including Breizhistance activists, gathered and a human fresco of the 44 = BZH was organised. The amazing aerial photographs demonstrated the popular demand for Brittany’s independence.

In early June, six young Breizhistance activists appeared in court to appeal a sentence they received for acts of graffiti undertaken in favour of the 44 = BZH campaign. The six had endured raids on their homes and 40 hours in police custody for this simple act of defiance in December 2008. At their initial trial, the six received a fine totalling €32,000 fine, two month suspended prison sentences and 100 hours of community service each. This obvious act of overkill by the French state is the subject of ongoing protests.

One of the more original aspects of the Breizhistance campaign to secure the national rights of the Breton people was in relation to the bi-annual Forum on Human Rights held in Nantes. The conference is hosted and funded by the local administration in Nantes which is controlled by the French Socialist Party.

The sessions of the 2008 conference included discussions on Identities and Minorities and The Crisis in Labour Law. This from a political party which cooperates closely with the French right to deny Bretons and other oppressed peoples self-determination, while also promoting privatisation and the EU inspired race to the bottom in terms of workers’ rights.

Breizhistance took the opportunity to highlight what an obvious joke the conference really represented by organising a colourful protest.

Just as in Ireland, the struggle for national independence and socialism is alive and well in Brittany.