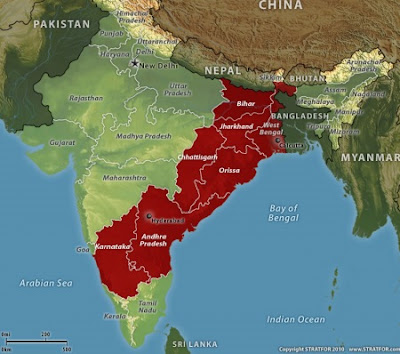 1. Can you tell us briefly about Communism in India?

The Communist Party of India was founded originally in 1919 in Kolkata then re-founded in Soviet Tashkent in 1925 under the impact of the Russian Revolution.

The Communist Party of India concentrated on the urban areas in the 1920’s and 1930’s and faced repression by the British authorities who banned the party. Of the repression the most famous case in the 1930’s was the Meerut trial.

The Second World War brought out some contradictions within the Communist Party of India especially when the party refused to support the quit India Movement.

By the late 1970’s and early 1980’s new groups of the third trend emerged in different parts of India in Andhra Pradesh we saw the rise of the Communist Party of India Marxist Leninist Peoples War) and in Bihar and West Bengal the of the Maoist Communist Centre (MCC) which has a long history back to the 1960's. Other groups like Communist Party of India Marxist Leninist (Party Unity) also emerged.

By the 1990’s these forces met up geographically in central India with violent clashes unable to resolve contradictions in a comradely way.

This low in the Indian Maoist movement then gave way to a drive for unity first with the Peoples War Group with Party Unity and then with the Maoist Communist Centre to create an all India Communist Party – The Communist Party of India ( Maoist) in 2004. For the first time Maoists in India could work on an all India revolutionary strategy

2. The Indian Maoists have criticised the line of the Nepalese Maoists – what is their critique all about?

Comrade Azad of the Communist Party of India Maoist who was recently murdered by the Indian authorities wrote a polemic attacking the Nepalese Maoists after 2006 for participating in bourgeois elections and agreeing to the cantonment of the Peoples Liberation Army.

The Indian comrades believed that the People’s War in Nepal should have been continued. Of course the Nepalese comrades think that they are continuing Peoples War in another way by developing a strategy to take control of the urban centre’s like Kathmandu. The Nepalese Maoists are utilising elections to win mass urban as well as rural support.

The exchanges between the Nepalese Maoists and the Indian Maoists reflect the different level of struggle in the two countries. Comrade Ganapathy of the Communist Party of India Maoist in his interview with Jan Myrdal approvingly notes that the Nepalese Party is involved in a two line struggle of the issues raised by Indian comrades.

However I would like to add that we should not seek to exacerbate the real differences that exist between the Indian and Nepalese comrades has some so called revolutionary groups do in the West.

3. How do Communists unite the Mass Movement with the Communist Movement in India?

This is a difficult question but we know the outlines of the problem. Has Bernard D’ Mello of the Economic and Political weekly has said the Communist Party of India Maoist has raised the struggle of the rural poor to new heights in India with the Adivasi struggle.

However on its own the rural struggle cannot produce the Indian revolution – it can provide the spark – the urban areas need to be won over to the cause and the Communist Party of India Maoists recognises the problem and welcomes criticisms by urban groups involved in the struggle to build unity with the rising communist movement. See Ganapathy interview with Jan Myrdal.

Has the urban struggle unfolds and unites with the struggle of the rural poor practice will provide an answer to the question of uniting communists with the mass movement.

4. What kind of contradictions exists between the communist movement and the mass movement?

The Maoist movement is primarily a rural movement and need to develop its slogans and policies for the urban areas. Has Harsh Thakhor has written

The working class was not fully explained the link between their interests and the agrarian revolutionary movement but slogans glorifying heroes of armed squads.”

Overcoming the contradiction between the rural and urban struggles is one of the primary questions addressed by the CPI Maoist today.

5. What is the Red Corridor and why do Communists have many sympathisers in that region or area?

The area of central and northeast India from Bihar which borders Nepal to Andhra Pradesh constitutes the Red Corridor of India some forty percent of rural India.

This area is also the forested and jungle area of India and it also happens to be the area where the poorest and most hunger stricken area of India which according to Binyak Sen and Arundhati Roy should be declared famine zones by the Indian Government.

However the Indian Government has chosen food has a weapon of war to fight the Maoist and Adivasi rebellion.

This area of the Red Corridor also happens to have rich mineral resources like coal and iron ore, bauxite, gold and diamonds. The Indian Government and State Governments has signed hundreds of Memorandums of Understanding ( MOU’S) with Multi National Corporations and Indian compradors selling both land and resources under the feet of the people who live there.

The Maoists have also operated in this area for 30 years originally as separate groups like Peoples War and Party Unity and Maoist Communist Centre. They have long campaigned for the defence of the Adivasis and the unified party in 2004 launched a campaign against the Multi National Companies and the Indian Compradors.

Hence this is the area of the greatest sympathy for the Maoists who are defending the Adivasis people against the Genocidal onslaught of the Indian Government with Operation Green Hunt. This is an Indian Government that would happily starve its Adivasis population to death so it can steal the minerals and resources for the MNC’s and the compradors.

6. What are the biggest challenges that the Indian Communist movement is facing today?

The first challenge is the enormous military offence launched against the Maoists and Adivasis people. A bigger military deployment than western forces in Afghanistan.

Overcoming these challenges will help create the all India coalition for revolution led by the Indian Maoists.

7. What are the lessons can Communists in the West learn from the contradictions that the Indian comrades have faced, solved

Th first lesson that Indian Maoists have advanced is the question of resolving contradictions amongst themselves.

It was only in the 1990’s that rival groups of Maoists were killing one another by the 21st century not only are most Maoists united in one Party the Communist party of India Maoist but they are resolving contradictions in line with struggle transformation unity and not struggle split has in the past and a healthy two line struggle is the new weapon of communist advance in the 21st century.

The second lesson we can learn from Indian Maoists is the successful application of the mass line in the rural areas and particularly the success with the indigenous tribal peoples. The application of a mass line that “listens” to the Adivasis and not just “commands” them is an important development requiring emulation.

Hello, Nick, here is Paolo from CARC Party, Italy. I read the interview and appreciate it, particularly the stressing of the need the CPI(m) has to develop its strength in urban areas, the references to the interview of Ganapathy, that none of so called reavolutionary groups you are talking about seems to have read, and the need to not emphasize the differences between Indian and Nepali Maoists.
In solidarity,
Paolo