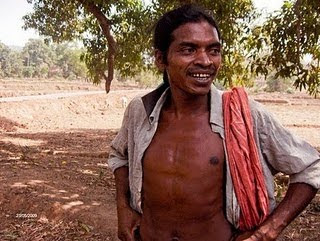 Both the SPs of Rayagada and Kalahandi deny that anti-Vedanta activist Lada Sikaka Majhi (35) was tortured in custody. But the deep injury marks on Majhi’s body have something else to say. Majhi is associated with the Niyamgiri Surakshya Parishad, which is opposing the Vedanta Group’s proposed mining lease in Niyamgiri hills, spread over Kalahandi and Rayagada districts, both about 550 km south-west of Bhubaneswar.

On August 9, Majhi was on his way to Raipur in Chhattisgarh in a vehicle, along with two other anti-mining activists, to board a train to New Delhi. They were to attend a meeting on the Forest Rights Act.

As their vehicle was passing through the Niyamgiri forest, more than 12 armed men with AK-47 rifles stopped their car, snatched the car key and a mobile phone, and dragged out Majhi, his companion Sana Majhi and a woman activist. The men packed them into another vehicle and drove towards Rayagada. They threw Sana Majhi and the woman out of the vehicle on the way.

“I could not see where they were taking me because I was blind-folded. After about four hours, my blind-fold was removed and I found myself in a police station,” Majhi said.

“There they started beating me with bamboo sticks. They accused me of being a Maoist, organising Naxal meetings on the Niyamgiri hills and uniting the Dangria Kandhs (tribe) to protest against Vedanta.

“I told them that I was not a Maoist and organising meetings of the Niyamgiri Surakshya Parishad, fighting for the protection of the hills. But they did not listen to me and beat me.”

This continued for the next three days, he said. The police then coerced out of Majhi a statement saying that he had sheltered Maoists. On the fourth day, they took his left thumb impression on a blank piece of paper and let him off with a warning: “No further meetings.”

When asked why Majhi was taken into custody, Rayagada SP Anup Krishna said: “We had information that he had Naxal links. We let him go the day after we found that he was just organising meetings for the Niyamgiri Surakshya Parishad.”Kalahandi SP Sudha Singh and Krishna denied that Majhi was beaten up. “He is lying,” Singh said