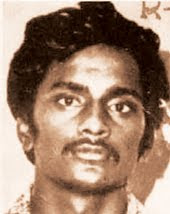 Top Maoist leader Azad, who the Andhra Pradesh police claimed to have killed in an encounter on July 1, was shot from very close range, according to his post-mortem report accessed by Rediff.com’s Krishnakumar Padamanbhan.

Top Maoist leader Azad, alias Cherukuri Rajkumar, who the Andhra Pradesh police claimed to have killed in an encounter in the forests of Adilabad district in Andhra Pradesh, was shot from very close range, probably from less than one foot, according to his post mortem report, accessed by Rediff.com

The post-mortem report stands in contradiction with the police version that Azad was killed in a gun-battle between 11 pm and 11.30 pm on July 1 in Sarkepally village, Wankedi, in Adilabad district.

After the Andhra Pradesh police claimed Azad, a member of the Communist Party of India-Maoist central committee and politburo as well as its national spokesman, was killed in the forests of Adilabad district, the Maoists claimed that he had been picked up in Nagpur a day earlier, flown to Adilabad by helicopter, and executed in cold blood along with a man named Hemchandra Pandey.

In May, Home Minister P Chidambaram had invited Swami Agnivesh, who had led a peace march in Chhattisgarh in April, to mediate with the Maoists and explore the possibility of a cease-fire, which would likely result in peace talks with the central government.

He also wrote to the Maoists, informing them about the government’s interest in a dialogue, to bring about a peaceful resolution to the Leftist insurgency that has crippled life in many districts in the country.

Azad responded on the Maoists’s behalf, expressing willingness in possible talks with the Centre and indicating that his organisation could think of a cease-fire.

One sticking point was Chidambaram’s insistence on a date for a cease-fire, which the home minister felt would indicate the Maoists’s intentions.

Once a cease-fire — the duration of which could extend for three days or six months or longer — was in place, Chidamabaram told Agnivesh talks could begin.

In late June Agnivesh wrote again to Azad, suggesting three likely dates in July when the cease-fire could go into effect.

Azad was carrying Agnivesh’s letter with him the day he died.

There are other discrepancies in the police inquest and the First Information Report, which too was accessed by Rediff.com

According to the post mortem report, the first bullet, which killed Azad left ‘a one centimetre oval-shaped wound with darkening burnt edges present at the left second intercostal space’and exited ‘at the 9th and 10th intervertebral space, lateral to the spinal vertebrae on the left side’.

This raises two key aspects regarding the shot that killed Azad:

First, according to doctors and experts, such darkening edges in the entry wound happens only due to burns caused by a bullet fired from very close quarters, mostly from less than a foot.

For this to happen the bullet must have been fired from above the victim at close quarters.

But according to the first information report, the police was firing at Azad, who they said was on a hilltop, from a distance and from below.

The FIR says Azad, accompanied by 20 to 25 Maoists, opened fire on the police from the hilltop, after which the police retaliated, killing Azad and Hemchandra Pandey.

The Andhra Pradesh police, however, denied the fake encounter theory and maintained that it was a genuine gun-battle.

Regarding the darkening at the entry wound, they said burn marks happen in case of firing from a distance also.

“We have also checked that aspect with forensic experts. They say it is possible that shots fired from a distance can also cause burn marks,” a senior officer told Rediff.com

The police report has a lot of holes in it, and raises many questions:

The gist of the FIR (crime number 40/2010) filed by Station House Officer Mansoor Ahmed at the Wankedi police station, Adilabad, at 9.30 am, July 2, is:

Intelligence divisions informed them that a group of 20 CPI-Maoist members had crossed into Andhra Pradesh from Maharashtra  and were moving about in the forest area.

At 9 pm, personnel from the Asifabad police station and a special police party launched a search operation in the forested and hilly region between Sarkepally and Velgi.

At 11 pm, the police team — equipped with night vision devices — spotted the Maoists on a hilltop and asked them to surrender.

As the Maoists opened fire, the police retaliated in self-defence.

The firing lasted for 30 minutes after which the police climbed the hilltop and halted.

When they searched the area early in the morning, they found two unidentified bodies — a 50-year-old man, and a 30-year-old man wearing sandals with an AK-47 and a 9 mm pistol lying by their respective sides.

1. If, according to the FIR, the Maoists were on a hilltop — which strategically means the Maoists had the terrain advantage — how was Azad killed by a bullet fired from such close quarters that it caused a burn?

2. The FIR is against ‘unknown Maoist terrorists’.

But in their inquest, accessed by Rediff.com, the police have identified the slain Maoist as Azad at 6 am, July 2.
In fact, local journalists said they got phone calls at 6 am from senior Adilabad police officers informing them that Azad has been killed in an encounter.

“The Adilabad SP (superintendent of police) called me and other journalists at 6 am and told us Azad had been killed in an encounter in this area. We reached the place immediately. We searched the area till 1 pm but were unable to locate the bodies. Then, some local policemen came and guided us to the location. We saw the bodies of Azad and another person,” says a local journalist.

Question: If the police had already identified Azad at 6 am, why did they not name him in the FIR, which was filed three-and-a-half hours later?

The FIR says the police party, which was tipped off about the presence of Maoists in the forest, reached there around 9 pm, July 1 and with the help of night vision devices, spotted 20 to 25 Maoists.

The FIR also says that after the gun-battle ended at 11.30 pm, the policemen reached the hilltop and halted. It says the police party found two bodies at 6 am when they began searching.

Question: If the police had night vision devices, as claimed in the FIR, and if they had reached the hilltop occupied by the Maoists after the gun-battle had ended, why did they not use the same devices to check for dead or hidden Maoists at that time? Why did they have to wait for sunlight to spot the bodies?

Outside of these discrepancies and questions arising out of the official documentation, there are also some other pertinent questions:

4. In cases of encounters, the police are supposed to launch a magisterial probe into the matter.

But in Azad’s case, even 52 days after the encounter, the revenue district officer, who is supposed to conduct the probe, has not even issued a notification where witnesses from the general public, if any, are called to present themselves before the magistrate.

The villagers in Sarkepally and Velgi — the place where the police claim that the encounter happened is between these two villages — said they saw police vehicles go to the spot on the night of July 1.

“We saw some vehicles go past our village. Then at about 11.30 I heard gunshots,” said a villager who did not want to be named. “We have seen encounters here in 1997 and 2005. Those times, the police came during the day and we could hear gun shots throughout the night. This time it was not like that. They came in the night and we heard some shots and that was it.”

They also said there has not been any Maoist movement in the region for at least a year.

“After 2005, their movement thinned quiet a bit,” a village elder said. “In the last two years or so, there have not been any Maoists in the area.”

Kranti Chaitanya, general secretary, Andhra Pradesh Civil Liberties Committee, who has challenged the police in several fake encounter cases, said the sizes of the entry and the exit wounds clearly show that Azad was shot from close quarters, and that it raises critical doubts about the police claim that he was killed in a gun-battle.

“Even dead bodies tell a lot of stories. In Azad’s case, the entry wounds are all narrow in diameter, meaning he was fired at from point blank range. Had he been involved in the gun-battle and the police had fired from the distance that they claim, the wounds would have been bigger in diameter,” Chaitanya, who recently helped bring out a book on fake encounters, said.

Activists of the Co-ordination of Democratic Rights Organisations, who visited the encounter spot and the Wankedi police station on a fact-finding mission on August 21, said the encounter raised several larger and disturbing questions.

“From our fact-finding, this is clearly a fake encounter,” said Prashant Bhushan, senior Supreme Court counsel. “But more than the incident itself, it raises several significant issues. It is well known that the Union home ministry was, through Swami Agnivesh, engaged in exploring the possibility of a dialogue with the CPI-Maoist. Agnivesh was talking to the Maoists through Azad.”

“The alleged encounter in these circumstances and at such a time raises important questions: How could the Andhra Pradesh police’s special branch, dedicated to combating Maoists, murder Azad in this manner without the knowledge of the Union home minister and the state government, particularly when the Union home ministry is said to be leading the joint offensive against the Maoists?” Bhushan asked.

He said if the Union government was sincere in seeking dialogue, it would have been “natural for Home Minister (Palaniappan) Chidambaram to express concern about the execution of the key actor from the Maoist side with whom he was exploring the peace dialogue.”

“His explanation on the floor of Parliament was that the enquiry is a state subject,” Bhushan said. “This is unacceptable because the Andhra Pradesh state government is run by the Congress party and had the Union home minister sought an enquiry they could not have refused,” he said.

The umbrella organisation’s fact-finding team also raised some other questions.

“How did the police pinpoint the Maoists’ location in a forest several hundred square kilometres along the Andhra-Maharashtra border? And despite 30 minutes of firing not a single police personal suffered any injury, whereas only Azad and Hemachandra Pandey are killed — this when the police themselves say the Maoists were on a hilltop and they were on lower ground,” asked Gautam Navalakha of the People’s Union for Democratic Rights.

The activists demanded a judicial enquiry into the encounter.

“In any case, the central government is empowered to constitute an enquiry under the Commission of Enquiries Act, 1952. In the light of the significance of the assassination, which has scuttled the peace process, it is imperative that the government institute a high level independent enquiry headed by a sitting/retired Supreme Court judge nominated by the Chief Justice of India [ Images ],” said activist Kavita Srivastava, who was part of the team as an independent member.

It also demanded that an FIR be registered against the police and the case be independently investigated in accordance with the National Human Rights Commission guidelines.