A Report of Anti-Operation Green Hunt protest in New York on August 13, 2010 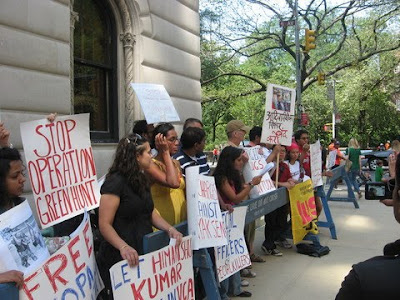 Sanhati (www.sanhati.com), a forum for solidarity with peoples’ struggles in India, successfully organized a protest demonstration in front of the Indian Consulate in NYC on August 13 against Operation Green Hunt to coincide with India’s independence day on 15th August .

The demonstration continued from 11 am to 1pm and was marked by chanting of slogans, distributing pamphlets to passers-by, making speeches in support of peoples’ struggles in India, singing songs of resistance and finally submitting a signed petition registering a strong protest against the government’s military offensive in the regions populated by the indigeneous (adivasi) people.
Posted by nickglais on 8/16/2010 03:29:00 PM