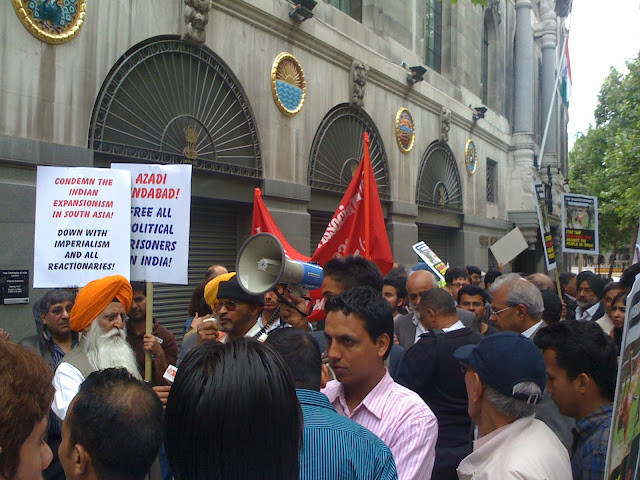 The protest at the Indian High Commision organised by the newly formed Alliance for Peoples Rights in South Asia was a success with many different organisations participating including the Nepalese Progressive Forum, Indian Workers Assocation (GB), South Asia Solidarity Forum, International Campaign against the War on the People of India, Kashmiri Workers Assocation, Anti Caste Discrimination Alliance,and a Sikh organisation Dal Khalsa UK.

There were speeches from the different South Asian organisations present condemning the murder of Comrade Azad and the journalist Hem Pandey.

The George Jackson Socialist League and the Coordination Committee of the Revolutionary Communists of Britain made speeches strongly condemning the murder of comrade Azad and journalist Hem Pandey and pledged themselves to expose the crimes of the Indian State before the working people of Britain.

A statement of the Coordination Committee of Revolutionary Communists of Britain condemning the murder of Comrade Azad and the Journalist Hem Pandey was distributed at the protest.