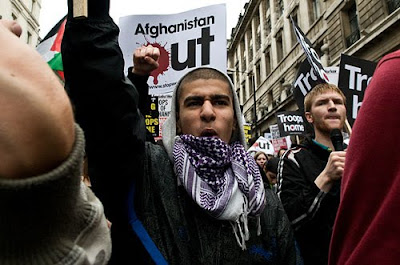 Chetwynd Barracks at Nottingham is where many British armed forces personnel are mobilised before being sent to fight In Afghanistan. A small picket was held on 14th. August under the slogan 'Bad War, Don't Fight!'. Protestors urged soldiers to follow the example of Lance Corporal Joe Glenton and others by refusing to fight in Afghanistan. Leaflets (see text below) were distributed to soldiers entering and leaving the camp. Megaphone appeals were made for the troops to take the initiative in ending this unjust, murderous war. It was pointed out that although the great majority of people in Britain are against this futile war, the politicians and generals persist in this folly, happy to sacrifice their own soldiers as dead heroes.

The Government and media propaganda campaign in recent years portraying Britsh forces as "heroes" has intimidated many people from protesting to the troops and when they are paraded through town centres.. It is essential to make such demonstrations and today's event shows that this is possible. Many soldiers have doubts about their part in this war and some would welcome support for their dissent. The Stop the War Coalition has deliberately avoided taking such actions.

Those of us demonstrating today call for further pickets and demonstrations at military bases and parades across the country.

American, British and other NATO forces attacked and invaded Afghanistan in 2001. Since then this war of terror against the Afghani people has dragged on and is intensifying and spreading. Now NATO are sending in many more thousands of troops because they have failed to crush the resistance of the Afghani people to foreign invasion.

FACT: No Afghanis were involved in the 9/11 attack on the Twin Towers in New York.

FACT: It was America and Britain which attacked Afghanistan, the Afghanis did not attack Britain or America.

FACT: Most of the heroin on British streets, especially in Nottingham, comes from these criminal warlords who have made billions from the misery of drug addiction here.

FACT: The war in Afghanistan is costing billions each year while massive cuts are being made in public services in Britain.

FACT: The British Government says that Afghanis are plotting to carry out terrorist attacks in Britain. Yet the few acts of terrorism in Britain have not been committed by Afghanis.

FACT: British forces in Afghanistan are among the best equipped soldiers in the world, able to call in devastating attacks by RAF Tornados and Harrier fighter-bombers on Afghani villages.

FACT: For each dead British soldier the British Army claims it has killed at least a hundred Afghanis.

Ever since 1838, on and off, the British Army has been attacking Afghanistan. The Afghanis always have fought back and defeated foreign invaders. In the 1980’s they repulsed a massive invasion from the Soviet Union. Sending more troops will simply make them fight harder to defend their homeland.

British soldiers know that the politicians and generals have led them into disaster. A few military personnel have taken a heroic stand and refused to serve in Afghanistan. Lance Corporal Joe Glenton, jailed for refusing to fight in Afghanistan, said, “The real enemy is not the man in front who is facing your rifle, but the man directly behind and above you telling you to pull the trigger.” Others should follow his example by not fighting this oppressive war.