Prachanda fails to get elected Prime Minister but improves his position 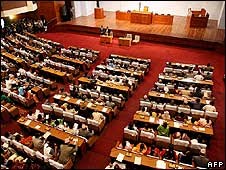 It proved third time unlucky for Nepal as parliament Monday failed to elect a new prime minister for the third time in a row, with yet another run-off in the offing, probably on Thursday.

Ignoring warnings that the house was becoming an object of ridicule at home and abroad for its continued failure to elect a new premier, the major political parties refused to bury the hatchet, resulting in Monday's prime ministerial election ending in a fiasco yet again.

Prachanda, who already had 235 MPs, needed to woo only about 70 votes from outside parties to attain a simple majority of 301 MPs. But he could poll only 259 votes while 114 voted against him and 208 MPs abstained. Nearly 20 MPs did not turn up to take part in Monday's vote with its foregone conclusion.

However, the Maoist chief improved his position, getting 18 votes more than last time. With four powerful Terai parties Monday saying they had common grounds with the Maoists, Thurday's election can find him in a better position.
Posted by nickglais on 8/02/2010 11:05:00 AM