Democracy and Class Struggle publishes this Press Release by Amnesty International and welcomes the decision by India's Ministry of Environment and Forests concerning Niyamgiri but we are still cautious because we do not trust the Orissa Government or Vedanta not to be duplicitous.There is already talk by the Orissa Government to appeal to the Supreme Court or the Prime Minister to overturn the decision of the Ministry of Environment and Forests. 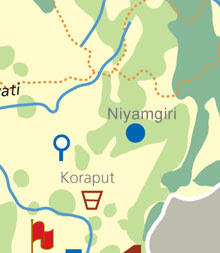 Amnesty International today described the Indian government’s decision to reject the bauxite mine project in Orissa’s Niyamgiri Hills as a landmark victory for the human rights of Indigenous communities.

India’s Ministry of Environment and Forests today rejected the mine project proposed by a subsidiary of UK-based Vedanta Resources and the state-owned Orissa Mining Corporation, after finding that the project already extensively violates forest and environmental laws and would perpetrate abuses against the Dongria Kondh adivasi and other communities on the Hills.

"The Dongria Kondh and other local communities have been struggling for years for this decision, which is a very welcome one,” said Amnesty International's Asia-Pacific Deputy Director, Madhu Malhotra.

“The companies and the Orissa government should now guarantee that they will not attempt to simply move the project to another site without ensuring adequate safeguards - they must ensure they will respect the human rights of Indigenous and local communities wherever the companies operate.”

Amnesty International also welcomed the government’s decision to suspend the clearance process for the six-fold expansion of the Lanjigarh refinery at the foothills of Niyamgiri, operated by Vedanta subsidiary Vedanta Aluminium, after a government’s expert committee found it to be illegal.

“The authorities should order a clean-up of the Lanjigarh refinery, which has caused air and water pollution, seriously affecting the rights of neighbouring communities who are finding life there unbearable”, said Madhu Malhotra.

Amnesty International called on government authorities to establish a clear and transparent process that seeks the free, prior and informed consent of any Indigenous communities who may be affected by such projects, and respect their decision, in accordance with national and international law.

The Ministry-commissioned expert report that underpinned today’s decisions, documented the companies’ legal violations and human rights abuses. Its findings and the rejection of the project are consistent with Amnesty International's extensive report published in February 2010, Don’t Mine us out of Existence: Bauxite Mine and Refinery Devastate Lives in India.

For eight years, the Dongria Kondh and other communities in Niyamgiri have been protesting against bauxite mining plans by Vedanta Resources subsidiary, Sterlite Industries India, and the Orissa Mining Corporation.

The communities were concerned that the project, which would have been situated on their traditional sacred lands and habitats, would result in violations of their rights as Indigenous peoples to water, food, health, work and other rights to protection of their culture and identity.

“After years of struggle and visits by committees our voice has finally reached Delhi,” a Dongria Kondh leader today told Amnesty International.
Posted by nickglais on 8/24/2010 11:32:00 AM