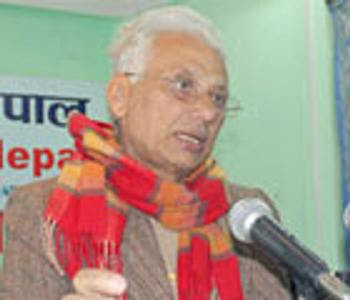 UCPN (Maoist) Secretary CP Gajurel on Monday blamed the naked intervention of India for the parties failing to elect a new prime minister even after four rounds of election.

Speaking at a programme organised in the capital today, Gajurel claimed that the special emissary of the Indian prime minister Shyam Saran started political parleys in the country with the sole purpose to prevent the formation of a Maoist-led government.

He said that people are dissatisfied and disappointed as the parties could not elect a new prime minister even after four rounds of election.

Gajurel said, "It is a wrong understanding of the Nepali Congress and the CPN-UML that the Maoist party will become a civilian party only after its disarmament."