Who is more dangerous – the BNP or the Labour Party? 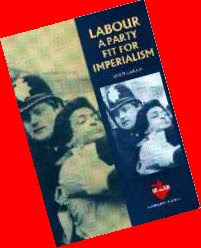 In the June 2009 election to the European Parliament, the openly racist British National Party (BNP) won 6.2% of the vote, giving it two seats. On 22 October BNP leader Nick Griffin appeared on BBC television debating show Question Time alongside Labour Party Minister of Justice Jack Straw. Griffin’s appearance was greeted with widespread and understandable outrage. At a series of meetings around the country the RCG posed the question ‘Who is more dangerous – the BNP or the Labour Party?

Anti-racists, the Muslim community and all progressive people were right to be angry that the overtly racist BNP was given public air time but, by concentrating entirely on Griffin, Unite Against Fascism (UAF), which organised the demonstration outside the BBC on 22 October, allowed Straw and the others to get away without any criticism of their own racist programmes.

Griffin and Straw have both made headlines with their hostility to immigrants, Muslims and Travellers. The BNP demands the deportation of illegal immigrants and ‘foreign criminals’, financial incentives for immigrants to return to their countries of origin, an end to new immigration except in exceptional circumstances and the rejection of the applications of asylum seekers who have passed through safe countries to get to Britain. But most of these demands have already become law during the Labour administration in which Jack Straw has played a leading role. The latest round of restrictions on economic migration was announced by Prime Minister Gordon Brown on 12 November.

While Griffin was grilled by the Question Time panel and audience, Jack Straw sat unchallenged. Yet Straw was Foreign Secretary when Britain invaded Afghanistan and Iraq, and Home Secretary when 58 Chinese immigrants died in the back of a lorry trying to get past punitive immigration laws he was responsible for introducing. He allowed murderous Chilean dictator General Pinochet to escape extradition, vetoed publication of documents that could have proved the illegality of the Iraq war, refused to call for the US torture camp in illegally occupied Guantanamo, Cuba, to be closed and covered up British government collusion in torture. As Minister of Justice, he presides over a massively overcrowded prison system and an immigration service which boasts of deporting one person every eight minutes.

The European election saw Labour come third behind the Conservatives and the United Kingdom Independence Party and the next general election looks increasingly likely to be won by the Conservatives. This is causing a panic on the left, mainly taking the form of calls for unity and a focus on ‘defeating the Nazis’. The Socialist Workers Party (SWP), the driving force behind the UAF, has put out the call for ‘the broadest possible unity in action to isolate and drive back the BNP’. (Socialist Review July/August 2009). In essence the SWP and its fellow travellers are building an electoral bloc to support a future Labour vote.

UAF sponsors include nearly 60 Labour MPs, nine MEPs, 20 trade unions, the editors of Tribune, Red Pepper and the Morning Star and political editor of the Daily Mirror, as well as Ken Livingstone, Tony Benn, TUC General Secretary Brendan Barber and Leroy Logan of the Black Police Association. Its main spokesperson Weyman Bennett is a leading SWP member. The UAF national statement says that the BNP builds on racism, the attack on multi-culturalism, Islamophobia, anti-Semitism, homophobia and the vilification of refugees and asylum seekers. It warns that an electorally successful BNP would be a threat ‘to all those dedicated to freedom and democracy’.

Labour’s lack of freedom and democracy

However UAF is silent on the record of the last 12 years of Labour government on ‘freedom and democracy’ and, in fact, protects Labour and covers up this record. This Labour Party in power, like those of the past, is a loyal servant of British imperialism. The militaristic and parasitic character of British imperialism defines its relations with the rest of the world. We are living in the longest period of British military mobilisation for a hundred years.

Draconian immigration laws, accompanied by increasingly strident racism and hostility, are used to contain and control asylum seekers, who are the victims of Britain’s imperialist wars, and to regulate the supply of cheap migrant labour, encouraging temporary immigration when needed and expelling it when no longer required by capitalism. But former immigration minister Tony McNulty was invited onto the UAF platform at the mobilisation against the English Defence League (EDL) in Harrow on 11 September (see FRFI 211).

Despite legislation against race discrimination and the creation of an entire ‘race relations industry’, a handful of facts show that the double oppression of black and Asian people, racially and as workers, continues. The all-round rate of employment for white people of working age is 75%, for those of African-Caribbean origin it is 60% and for Pakistanis or Bangladeshis it is less than 50%. In the London Borough of Tower Hamlets two-thirds of Asian children live below the official poverty line.

British income inequality is the highest in the EU – higher than under Thatcher and the highest ever recorded. Labour’s years in power are concluding with a massive bail-out of the banking system topped off by big cuts in public spending and unemployment predicted to reach three million, with 18-24 year-olds hardest hit. The unemployment rate for black men, already higher than for white men, has risen over the past year to 18.2% – for white men, it has risen from 5.2% to 8.3%.

Jobseeker’s Allowance has been reduced by 25% in relation to average wages over the past 12 years; as few as 130 council houses have been built in each year of the 21st century and the chaos of privatisation, deregulation and outsourcing continues to channel public funding to Labour’s business friends. The prison population has increased by 20,000 since 1997 with 27% of prisoners from minority ethnic groups compared to 11% of the overall population.

In representing the interests of imperialism, Gordon Brown plays a two-faced role – placating the electorate while acting in support of British capital’s international interests. So he signs up to extend the movement of cheap labour from Eastern Europe, on the one hand, and calls for British jobs for British workers on the other.

Labour has not needed to be pushed to the right by the BNP. It is Labour that uses police to harass black people and Muslims. It is Labour that is driving asylum seekers to destitution, incarcerating and deporting them. It is Labour that colluded in rendition flights and sanctioned torture in the name of ‘the war on terror’. Yet this state racism is ignored by UAF and anyone who insists on talking about it as part of confronting the BNP is put down as sectarian and against ‘unity’.

The UAF not only fails to acknowledge institutional state racism, it also fails to explain any racism whatsoever, despite saying that racism has risen sharply ‘in the last decade’. It displaces all responsibility for the rise of racism onto the ‘Nazi’ BNP and makes no attempt to explain the shift in class forces that has given it electoral support.

The BNP has undoubtedly taken root among sections of the working class as unemployment rises and public spending is cut. Its platform is essentially petit bourgeois, in so as far as it is spelt out. White supremacy is at its core although it was forced to back down when legally challenged on its whites-only membership policy. The BNP romanticises small-nation capitalism. It wants industrial jobs for British workers. It calls for repatriation of immigrants from Britain, repatriation of capital investment back to Britain and state control of the banks and finance sector which it regards as being dominated by Jewish interests. It is authoritarian in tone, promoting a strong law-and-order line, as if the 3,600 new criminal laws introduced in the course of the Labour government and increasing restrictions on civil rights were not enough.

The thuggish BNP are not the inheritors of Hitler and Mussolini, whatever delusions of grandeur Griffin and others may harbour about themselves. Historically, fascism arises in times of impasse between the competing interests of the ruling and working classes. Proletarian mass movements hinder imperial expansionism, which is capital in search of profitability, and challenge the power and authority of the capitalist class. The working class is not strong enough to seize power but the ruling class cannot crush it. The state responds by unleashing fascist gangs and other forces of reaction onto the streets and the capitalist state takes on the form of the fascist state.

We are not in that situation today. British financial capital reached such a position of dominance in the global economy that the City of London became the leading money centre in the world. British financial capital is parasitic to an unprecedented degree and Britain’s major ‘industries’ are banking, insurance and financial services, producing nothing and living off the sweat and raw materials of people across the globe. The protectionist ‘small island’ nationalism of the BNP is irrelevant to the interests of the ruling class. However, this does not mean that we should stand around idly while the thugs of the BNP, EDL and others carry out attacks. We support the slogan ‘self-defence is no offence’ and salute those who saw off the EDL in Birmingham and Harrow.

Although the state does not need auxiliary racist forces to defend it at this stage, it will inevitably move to crush any serious resistance against fascist groups. Black people, Asian youth and anti-racists will therefore find themselves once again up against the police, the courts and the media. The need for defence campaigns in support of those arrested is, as always, a central task for the left.

Banning orders – whether instigated directly by the state or as a result of misguided interventions such as that of ‘Hope Not Hate’ which campaigned for an EDL demo in Luton to be banned, resulting in a three-month ban on all demos – will be used to silence protest and an increasing part of the struggle will be to insist on the right to demonstrate at every level.

Large sections of the British working class benefit from British imperialism’s extraction of super-profits from the oppressed nations of the world. The standard of living, terms of employment and welfare state are rewards imperialism has allocated to the better-off sections of the working class. This is why the British trade union movement continues to be loyal to the Labour Party (with the notable exceptions of the RMT and FBU). The unions provide over 70% of Labour’s funding. The GMB has given £5.8m since the last election; between January 2008 and September 2009 Unite donated £6.5 million.

No unity with the murderous state

FRFI will work with any organisation that stands against racism at any and every level and we supported the demonstration outside the BBC during Question Time. However, experience has shown us that no socialist movement can go forward that does not challenge its own ruling class. It is dishonest and cowardly to displace responsibility for racism from the government onto a political fragment – from the Labour Party to the BNP. In the end, it is a question of power. The imperialist British state has the power. The Labour government directs that power. The BNP are abhorrent racists but they are far from being the greatest danger or threat in Britain today.