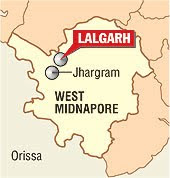 ( CGNet Moderators Note: We can not confirm the content of this note below from Nisha Biswas. We tried to check it with some local journalists who told us that they have also heard similar versions from the locals. They said that according to locals there was no exchange of fire, only search operation was carried out last night. And when they heard this morning that Lalmohan Tudu is dead in an 'attempted attack on joint force camp', they were surprised. The journalists also added that Mr Tudu is quite aged and not capable of carrying arms and attacking a camp.)

We all know how good our police is in making stories and killing innocents in the name of encounter. The West Bengal Police is no exception. There was no exchange of fire at Kantapahari as claimed by police. The fact is that the Joint security forces entered the house of Sri Lalmohan Tudu, President PCPA (People's Committee against Police Atrocities) around 11hrs in night, while he was preparing to go to bed.

He along with his other two relative Yubraj Murmu and Suchitra Murmu, both husband and wife, were picked up in front of his mother, wife and only daughter (who is appearing class X exam, starting today). His brother and his wife, who live in the same house were also present. They were then taken to a place Ghoraghata and murdered

Mr Asit Mahato, spokes person of PCPA has divulged these details on phone. ICalcutta TV reporter Pabak Sahu has also visited the place of murder. The forces have made this gunbattle story.

Before more people are murdered, it is time to oppose "Operation Green Hunt", the hideous scheme of Mr Chidambaram & Co. to exterminate lakhs and lakhs of tribals and to give thier land to corporates for ugly
exploitation.

One killed in PCPA-forces gunbattle near security camp

Superintendent of Police Manoj Verma said armed men of People's Committee against Police Atrocities (PCPA) assembled near the Kantapahari camp of the forces and fired, prompting the jawans to challenge them.

In the ensuing gunbattle, one person, believed to be a PCPA member, got killed and his body recovered while others retreated from the spot, the SP said.

"The PCPA members, with a number of Maoists among them, obviously had plans to attack the Kantapahari camp but the jawans were alert and repulsed them," Verma said. More forces were despatched.

Unconfirmed reports said the dead person has been identified as Lalmohan Tudu, a PCPA activist.