On the Perspective of the Resistance against Operation Greenhunt 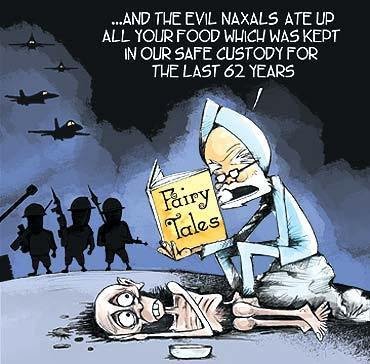 A Perspective on the Resistance to Operation Green Hunt - By Comrade Ajith, Secretary - Communist Party Of India (Marxist - Leninist) Naxalbari (Participant in the Revolutionary Internationalist Movement)

The Central government has deployed a huge military force targeting a wide area ranging from Jharkhand to Andhra Pradesh and Maharashtra to West Bengal - Odisha. This is the spearhead of a massive attack to suppress and eliminate the revolutionary movement advancing in this area, led by the CPI (Maoist). This suppression campaign has been named Operation Greenhunt. The Home Minister P. Chidambaram and top officials of the Manmohan Singh government have openly talked about using the Air Force and carryingout so-called surgical strikes. There are reports that advanced military-technical support and equipment from the US and Israel is being used.

These murderous plans of the UPA government has the open support of most parliamentary parties. The Congress, BJP and CPM are its main proponents. They are united in an unholy alliance against the people. This unity of ruling class parties and their anti-people suppression campaign has, on the other hand, triggered off an unprecedented polarisation. A wide range of progressive, democratic forces and personages have come forward to condemn and oppose Operation Greenhunt. They are joining up, along with revolutionary forces, to form broad platforms to mobilise people and resist the government's plans. They have rightly judged that Operation Greenhunt is nothing other than a “War on the People”. This development is a very important advance. It has already forced the Central government to change its offensive public stance, even though it continues with the suppression campaign.

There are many reasons motivating such a wide array of forces and people with differing political views and interests to come together against Operation Greenhunt. The most important one among them is the recognition that this suppression campaign, though immediately directed against the revolutionary war led by the CPI (Maoist), is the spearhead of a broader plan to attack and eliminate a wide range of resistance movements going on all over the country. They include movements against privatisation, displacement, environmental destruction, and many others.

They are obstacles in the plans of the UPA government to open up the whole country to the ravages of globalisation. This is why, the Central and State governments devote funds and forces to suppress them evenwhile they cut down on social services with the plea of resource shortage. The struggling masses are aware that they are fighting crucial battles. So they keep up stiff resistance despite facing repeated state attacks. This is also why these struggling forces, their supporters and democratic, progressive sections quickly understood the deeper implications of Operation Greenhunt and joined up against it. This is the crucial political significance of the broad countrywide movement emerging against the “War on the People”. It carries the potential to develop into a broad alliance against the people's enemies, internal as well as external. The question of its perspective thus becomes all the more important.

The dominant perspective right now is one that considers the need to clear out the Maoists and their followers from these mineral rich regions as the main motivation behind Operation Greenhunt. It is argued that their strong presence is holding up several crores of mining and power projects lined up by TNC's and Indian compradors. Hence the huge push to drive out the Maoists and secure these regions. This view is influential within the Maoist camp also.

Well, it is certainly true that a number of monopolies like Tata, Mittal and Vedanta are just waiting to plunder the resources of these areas. A good part of it is slated for export as raw material to imperialist countries. The only thing preventing this right now is the people's war and politicised Adivasi masses led by the CPI (Maoist). But to reduce Operation Greenhunt to this or even mainly consider it from this angle would be wide off the mark. It is like missing out US imperialism' s world strategic aims in the Iraq war and seeing it mainly as a war done for oil. The question of control over resources is certainly involved. But this is neither the sole issue, nor even the main one. The important thing to be grasped is the political, strategic aim of Operation Greenhunt. What is the ground reality?

The Adivasi masses of these regions have established control not just over its resources. They have taken control of their destiny, their lives, into their own hands. They are building a different society- vibrant with their tribal traditions, yet modern enough to imbue new values. They are not doing this for their own selves alone. No, they see it as part of a larger project concerning the whole country. They have been able to do this and achieve such a lofty vision with the force of arms, led by a communist party guided by Marxism-Leninism- Maoism.

We, as Maoists, believe that this is precisely why all this became possible. Therefore, for us, the resistance to the “War on the People” is a matter of defending this people's war by all means. But, obviously, this is not how it is viewed today by quite a number of forces and individuals who have courageously stepped forward to resist. Defence of the people's war cannot be made a basis for a broad unity that includes them. Does this mean that protection of resources or Adivasi rights remain as the only basis? No. We could make the real state of affairs existing in the Adivasi regions of India as a starting point.

Protection of scheduled Adivasi areas was promised by the Indian Constitution six decades ago. Later, the Panchayat Raj Constitutional ammendment promised a large dose of autonomy. All of this has been blatantly violated by the Central and State governments. Such Constitutional safeguards have become empty shells under which the most inhuman trampling of Adivasi way of living and habitats take place. Even the highest courts have either failed to prevent this or promoted it, as seen in the Narmada dam agitation. But here, in a large part of India, tribal peoples are making control over land, resources and society a reality, through struggles. This is an immediate fight to end exploitation, oppression and block aggressive moves of big corporates and the state. More importantly, it is a long term struggle projecting a different type of living.

What is this life? Sustainable development; people's friendly education; growing emancipation of women; a halt to domination and plunder of foreign and Indian exploiters; a new culture that rebuilds Adivasi traditions anew instead of mocking them. The illuminating fact is that all of this is being created by Adivasi tribes who are despised as 'primitives' by so-called mainstream society. The 'backwards' are teaching the 'forwards'. This hits at the very pillars of Brahmanism, the core of all reactionary anti-people thinking in our country. The motivation this could give to the numerous oppressed and exploited sections in the country is a real threat for the rulers.

Leaving out or minimising this political significance and limiting the resistance to a defence of resources or Adivasi human rights is not good. Unity should be achieved on the highest possible level. The country and the people need it. While all can debate on the rights or wrongs of the particular forms of struggle or political colouring, the defence of the achievements made by the Adivasi people, of the way of life they are building, can certainly be incorporated in the basis of a resistance forum against Operation Greenhunt. This much is already evident from the articles, media discussions and comments of notable intellectuals. We owe it to the future generations to defend the right of a people to decide their own destiny.
Posted by nickglais on 2/01/2010 10:49:00 AM