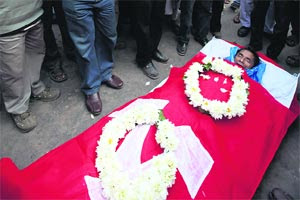 Kolkata: A silent funeral procession was taken out on Wednesday with the body of Swapan Dasgupta, editor of a banned Maoist magazine, by politicians and activists who had a custodial death.

Dasgupta, who was arrested under the Unlawful Activities Prevention Act (UAPA) four months ago, died Tuesday at the SSKM hospital where he was admitted with asthma and respiratory complications on December 17, the hospital superintendent Debashish Bhattacharya said.

Dasgupta was the editor of the Bengali version of the Maoist magazine ‘People’s March’. Among those who took part in the march Wednesday were Trinamool Congress MP Kabir Sumon and theatre personality Bivas Chakra borty.

Suman, who courted controversy for opposing anti- Maoist operations in West Midnapore district and bringing out an album of songs on Chhatradhar Mahato, the jailed Peoples Committee against Police Atrocities leader, says that Dasgupta was killed in custody and demanded a probe.

"The government allowed him to die. When he was shifted from jail to the SSKM hospital on December 17, he was not given a bed and was forced to lie on the floor. Even after he was detected with blood cancer, blood was not provided as requisitioned," Sujato Bhadra, Secretary of human rights NGO APDR, told an agency.

The funeral procession to the Keoratala burning grounds was followed by marchers carrying placards describing Dasgupta as ‘the first martyr of the UAPA’.
Posted by nickglais on 2/03/2010 12:55:00 PM