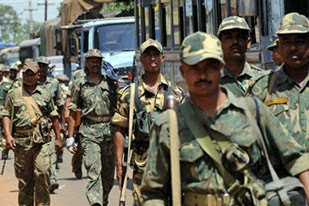 India's Maoists have offered to agree to a ceasefire with the Indian government if New Delhi halts its offensive against the rebel group, Indian media has reported.

Koteshwar Rao, also known as Kishenji, the rebel's top military commander, made the offer in a statement to Indian media late on Monday.

He said the ceasefire could hold from February 25 to May 7.

"We are ready to hold talks with the government only if the joint operation against us is halted for 72 days," he said.

But the government said on Tuesday that "in the absence of an authentic statement" it was unable to respond immediately.

Palaniappan Chidambaram, India's Home Minister, said such talks could only be possible if the rebels renounce violence, a demand the Maoists have so far refused.

"I would like a short, simple statement... saying 'We will abjure violence and we are prepared for talks,'" Chidambaram said.

"I would like no ifs, no buts and no conditions. Once I receive the (truce offer) statement, I shall consult the prime minister ... and respond promptly."

The government has launched an offensive against the rebels in several areas, but has so far failed to significantly curb their operations.

The Maoists say they are fighting for the rights of the poor but the government regards them as rebels and their political wing is banned from the Indian parliament.

The Maoists have been active in India since the 1960s and, according to Indian intelligence, 22,000 rebels are active in the country.

The rebels are also known as Naxals, after their first armed uprising, which took place in a small village called Naxalbari in the Indian state of West Bengal some 40 years ago.