The criminal politics of the Haitian bourgeoisie and imperialism 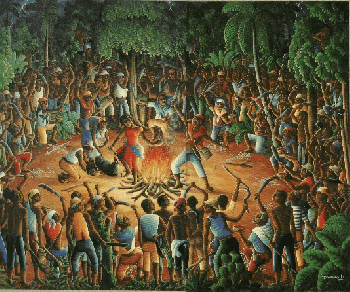 The gathering at Bois Caiman where Haiti's revolution started


History of Haiti is the history of an exploited, oppressed, dominated and occupied people by imperialism.

The cultural, economical and military intervention has been lasting for centuries :

Conquistadores, kings from Spain, France, Napoleon, imported the Black people from Africa and made them slaves, up to the uprisings that banished the slavery over the course of struggle punctuated with victories and defeats from the 17th century on.

After having driven out the colonialists, the bourgeoisie turned against the people to continue their exploitation and repressed fiercely all kind of contestation coming from the working classes.

American, spanish and french imperialists argued to divide and rule the country. Interventions through last century cannot be numbered, nor the takeovers (coup d"tat) and the tontons macoutes. American imperialists made an intervention against a progressist regime in the Dominican Republic slaughtering the population.

In Haiti, poverty is endemic : an inhabitant has got 1 euro per day to live. Unemployment reaches 40 to 50 %. On television, it has been showed that poor people make clay cookies not to die of starvation.

It is in this context of imperialistic domination and complicity with their haitian lackeys the compradore and bureaucratic bourgeoisie - that occurred the 7.3 magnitude earthquake on January 12.

What did Patrick Charles, geologist, former teacher at the Applied Geology Institute of the Havana, said on September 25 2008 in the haitian newspaper Le Matin ? All the conditions are gathered for a major seism to happen in Port-au-Prince. The capitalist inhabitants must prepare to this scenario which will occur soon or later

The authorities are obliged to take limited measures, even though unpopular, to protect some areas. The three last hurricanes reports in Haiti calls out to our conscience. We live a harsh period of time and we must act. The countdown has started. Nature needs us to be answerable. We have to act to save what can still be saved. Patrick Charles spoke these words.

But nothing was done !

The UN peacekeeping forces are in Haiti to maintain the imperialistic and compradore and bureaucratic bourgeoisie order and prevent peoples rebellion, under the pretence of humanitarian help.

Of course, the communists do not cast doubt on voluntary workers who expend considerable efforts (doctors, fire services, military and even policemen who sometimes risk their lives to save people). It is not this goodwill that it is called into question.


What we denounce is :

- The cupidity of the imperialists and their local agents who only think about taking advantage of what they receive from their masters to the detriment of their people.

- The dispatching of 10.000 militaries, to secure as they say, and no emergency services, no civil and construction engineering to keep roads and facilities in working order, as well as boats and planes to bring necessary humanitarian help.

The imperialists are there, not only with the intention of caring, but to occupy the country, prepare the coming of multinational organisations to build, set their head offices, build hotels, ect., in short, to make profit by juicy benefits from a catastrophy and reinforce their control over the economy of the country through their benevolent presence.

As said Jacques Roumain, a Communist Party leader of Haiti, in 1934, in his article Critique of the democratic reaction Manifesto simply and precise that this rallying will have to take place among the poorest proletariat, and later on, the most capable -once educated- of leading the struggle wholeheartedly, up to its ultimate emancipating consequences. Emancipating from the exotic imperialism and its haitian lackeys.

Today, in this time of tragedy, what lacks to the working-classes, to the haitian people is a communist party like Jacques Roumains, like other people in the world, to get it over with imperialism and bourgeoisie, a party that will take the necessary steps to avoid such tragedies.