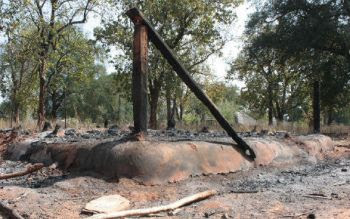 A charred wooden stake and three graves are all that remain of the Madavi family in this remote village in Chhattisgarh's Dantewada district.

"Madavi Kanni was lying face down in front of the burnt house," said an eyewitness. "She had been slashed with a sword and shot in the chest." The bodies of her father, Madavi Bajar, her mother Madavi Subbhi and her 12-year-old sister Madavi Mutti, were found under a tree, 50 metres away.

Testimonies collected by The Hindu from Gompad allege that a composite force of Adivasi special police officers and security force regulars appeared on the outskirts of the village in the early hours of October 1, 2009. "We ran away when we saw the force," said the witness, speaking on condition of anonymity. "We found the bodies when we returned."

"The police killed my brother, Soyam Subaiah, and fatally stabbed his wife, Soyam Jogi," said Soyam Bhadra, pointing to the courtyard where the bodies were found, "They also killed Madavi Venka and burnt two houses."

The Hindu interviewed Madavi Laccha, son of Madavi Venka, in January this year. Lachcha claims he saw uniformed men shoot his father in their cowshed, as he ran into the forests.

In all, nine Adivasi villagers, including two visitors from Bandarpet, were killed at Gompad that morning. The villagers' testimonies corroborate statements filed by 12 villagers and Himanshu Kumar in a writ petition filed in the Supreme Court. The petition accuses the security forces of killing two villagers from the neighbouring villages of Velpocha and Nalkathong, along with the nine at Gompad, on October 1, 2009, and holds them responsible for the deaths of six villagers at Gachanpalli on September 17, 2009.

In an interview on February 3, Director-General of Police of Chhattisgarh Viswaranjan denied all accusations and emphasised the willingness of the Chhattisgarh police to investigate the case.

Police sources in Raipur told The Hindu that security forces had entered the forests surrounding Gompad on September 30 2009 , a day preceding the massacre. The source could not confirm when the forces returned to their barracks. The source's information is lent credence by an IANS report that quotes Dantewada SP Amresh Mishra as saying two Maoists were killed on October 1, 2009, Nalkathong, - an area not far from Gompad.

Scattered details of the Gompad massacre have circulated across the thickly forested region of the Konta block in Dantewada district. Details of the post mortem, conducted by the police on January 23, have flashed from village to village - particularly the extraction of bone samples from the corpses. "Why are the police removing the bones?" asked a villager from Maitha. The samples were extracted to establish the identities of the victims.

Adivasis from the villages of Gompad, Velpocha, Nalkathong and Maitha admit that the area is a stomping ground for naxals and the security forces alike. Unverifiable information from local journalists claims that naxals were present in the vicinity of Gompad the night before the massacre, but left before the forces arrived.

A naxal flyer signed by the South Bastar Regional Committee, picked up by this correspondent in Bijapur district in February, refers to the Gompad killings and demands that the CRPF and the Koya Commandos be brought before a people's court.

As reported in The Hindu, the police have assumed total control of the movements of at least three of the 12 petitioners of writ filed in the Supreme Court: Sodi Sambho, who was shot in the leg at Gompad, was picked up by the police on January 3 this year. The other petitioners, Soyam Dulla and Soyam Rama, were picked up from a public hearing organised by an NGO in Dantewada on January 6 and have not been seen at the village since.

Madavi Kanni's husband, Kattam Dulle, and her infant son, Kattam Suresh, were also present at the hearing, as was Sodi Sambho's husband - Sodi Bhadra. They have not returned to Gompad as of date. "My father, Soyam Dulla, is a petitioner in that case," confirmed Soyam Bhadra. "We have not seen him since he was picked up the police on January 6 in Dantewada."

Villagers in Gompad disputed police claims that Soyam Rama, Soyam Dulla and Sodi Sambo were perceived as police informants. "No one has issued any threat," said a villager, speaking on the condition of anonymity.

Surgical glove wrappers litter the graveyard on the outskirts of Gompad, evidence of the post mortem conducted last month. Scraps of discarded clothing hang on a tree overlooking the graves of the Madavi family. "When the doctors exhumed the bodies, they removed the clothes and left them on the tree," a villager said. The clothes, which could contain evidence of bullet holes or DNA samples, have been exposed to the elements for over a month.

The Madavi family has proved inseparable even in death. Their graves lie side by side: Subbi and her husband Bajar were buried in the same grave, as were Kanni and her sister Mutti. In an adjacent grave lies Madavi Venka.