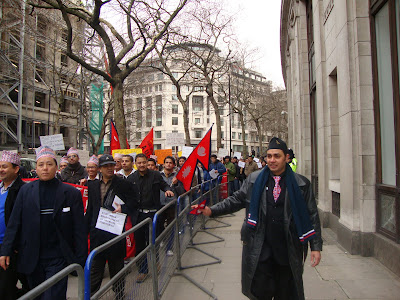 The protest, organised by the Progressive Nepalese Society UK (PNSUK), on 15th February was in response to the stepped up interference in the internal affairs of Nepal from the Indian state in recent months. Intervention can also be identified in Sri Lanka with the total subjugation and oppression of the Tamil people.

After a number of speeches from PNSUK members and supporters of Nepalese Struggle in Britain like the Co-ordination Committee of the Revolutionary Communists of Britain the march to the embassy began just before 1pm, heading down the Strand, briefly stopping eastbound traffic and on to the embassy in Aldwych.

Since the Indian state's independence from Britain it has been imposing dominance over Nepal. According to the PNSUK, "It has inherited the mantle of the British Empire in South Asia." On July 31st 1950 Nepal signed an unequal Indo-Nepal peace treaty, which was largely unpopular in Nepal, seen as a breach of sovereignty. This close strategic relationship dictated open borders, but the Nepalese widely accept that it allowed an unwelcome extension of Indian influence. India has built dams in Nepal, controlling water and electricity, flooded the Nepalese market with Indian goods and in stealth seized Nepalese territory displacing large numbers of Nepalese citizens.

In November 2006 the Communist Party of Nepal (Maoist), now the Unified Communist Party of Nepal (Maoist), entered into a political peace process with other Nepalese political parties. Since then, the Indian government has been closely involved in deciding the destiny of Nepal. One example of this was India's hand in re-instating General Rookmangud Katawal after his brief termination from his position in the army in May 2009. The president of Nepal Ram Baran Yadav overruled the decision and ordered him to continue his service. In turn this led to Prime Minister Prachanda's resignation and a general collapse of the government. 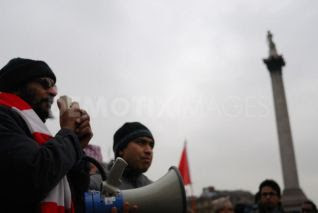