‘To establish a liberated area’: 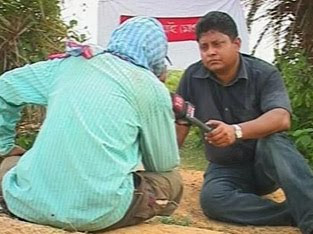 KOTESWAR RAO, alias Kishenji, is a politburo member of the banned CPI (Maoist) and is in charge of the party‟s operations in West Bengal, Jharkhand, Bihar and Orissa. He was drawn into the revolutionary movement when he was doing his B.Sc. (Mathematics) in Karimnagar, Andhra Pradesh. He became a full-time member of the CPI-ML (People‟s War) in 1974.

"We plan to spread our movement to north Bengal, the plains of Bihar, the central districts of Orissa and eastern Chhattisgarh," he told Frontline in an exclusive telephonic interview in which he talked about the Lalgarh movement, the Maoist programme of individual killings and future plans of the Maoist movement. Excerpts:

At the same time, there is, on the one hand, a worldwide economic crisis and, on the other, Indian multinationals seizing the land and property of the common people. These, too, had a role to play in the eruption in Lalgarh.

And of course the Nandigram and Singur agitations, in which we were also present, are certainly big factors. At present, it is not possible to carry out just a peaceful agitation in West Bengal; along with peaceful agitations there must be huge rallies and meetings involving the direct participation of thousands of people.

There is a view that the Lalgarh movement is a spontaneous tribal movement that became so big that the CPI (Maoist) had to get on to it or be left behind. Your comments.

It is not as if we started doing our groundwork in the region yesterday; we have been doing our groundwork for a long time. The Maoist role and leadership in the area has been a continuous process. But, at the same time, the PCPA [People‟s Committee against Police Atrocities] and the Maoist movement are not the same, and it would be incorrect to say that the people of the region have been influenced only by Maoists; they have been very much influenced by the PCPA, too.

But if there were no arrests following the assassination attempt on Chief Minister Buddhadeb Bhattacharjee on November 2 last year, would you have been able to build such a strong movement?

Not something like this. It would have developed in a slow process. But the reaction of the people worked to our advantage – much more than it did in Nandigram or Singur. We didn‟t have any demand other than that the police apologise to the people, but the State government did not agree to it. We were left with few options.

Did you at any point think that the movement might not need you?
Yes, I did. We expected a movement after November 2, but nothing so big. I expected the strength of the movement to be around 50 per cent of what it eventually became. But the movement itself has undergone a qualitative change over the months. Earlier, when the villagers protested, they assembled in large numbers with their traditional bows and arrows. Then the combined forces entered the region and many villagers fled.

Subsequently, they all returned and now they are not fleeing anywhere. They are standing their own ground and collecting weapons to strike back. So tell me, where do you think this spirit to retaliate is coming from? Whom do you think the villagers are supporting now?

In 2007, it was decided that the CPI (Maoist) would broad-base its activities and not focus only on individual killings like the earlier naxalite movement. But Maoist killings are being reported almost every other day. So in what way is it different from the old programme?

At that time, annihilation of the class enemy was the only form adopted to bring about the revolution. We have changed that. We say that annihilation is one of the forms. This was not invented by Maoists; we have seen in history that the masses have always allowed it. To us, annihilation is one aspect of our total movement.

It was not a regular feature earlier as you claim. It became a regular feature only after the combined forces entered the region. If you recollect, before the deployment of Central forces, we held a Jana Adalat [people‟s court] for 30 CPI(M) people in Madhupur [near Lalgarh].

More than 12,000 villagers attended the trial. The public wanted the death sentence for 13 of those under trial. But Bikas [the Maoist commander of operations in Lalgarh], after hours of persuasion, finally managed to convince the public that the time was not right to mete out such a punishment. Finally, the public agreed that those 13 people be just made to wear garlands of chappals and apologise. The other killings took place only after continued disregard of repeated warnings that were sent to the victims both by us and by the people of the region.

The victims were not just police informers, they practically marched with the combined forces. It is not that we killed only CPI(M) people, we killed members of the Jharkhand Party, too, for helping the combined forces and for joining the Gana Pratirodh [People‟s Resistance] Committee; and I would also like to add that there is no difference between the Salwa Judum and the Gana Pratirodh Committee.

The annihilation policy of old and what we do today are not the same. Along with individual assassinations, there are also other forms of actions that we undertake – different kinds of mass movements, social boycotts of culprits, and various developmental works.
In fact, recently, in Shankabanga village [in Purbo Medhinipur], we dug a seven-kilometre canal for irrigation. We have done similar work in many villages.

The CPI (Maoist) had announced that it will spread the movement to new areas following the general elections this year. Which are the areas that have been identified?
North Bengal, the plains of Bihar, the central districts of Orissa and eastern Chhattisgarh. All these are backward areas where multinational companies are trying to penetrate, and the State governments are signing memorandums of understanding with them. The strategic location of these areas will also help us in our movements.

The movement in Orissa is one of the most upcoming movements by our party and it will facilitate a combined consolidation of our movements in the neighbouring States of Jharkhand, West Bengal and Andhra Pradesh, bringing as many as 15 districts under our control.

Tell us something about your plans in West Bengal.
Very simply, to establish a liberated area. We decided in 2007 that this [the Jangalmahal] would be a guerilla area. Since then we have progressed a lot, we have already reached out to more than half the population of the region and made it politically aware. I can tell you only so much. Our politburo does not allow us to divulge the tactical aspects of our programmes.

But is there widespread recruitment into your movement from the region?
There has to be recruitment, or else how will the movement grow?

There are reports of fresh plans by your party to try and assassinate the Chief Minister, and even storm Writers Buildings. Your comments.
The media need sensational news, and the police need to justify their fat salaries. Do I really need to elaborate? As I have repeatedly said, to kill Buddhadeb Bhattacharjee was not my decision. It was the decision of the people of Nandigram, the people of West Bengal, and even sections of the liberal bourgeoisie.

Railway Minister Mamata Banerjee, who earlier extended her support to the PCPA’s movement, seems to have distanced herself from it. Your comments.
I have been asking Mamata Banerjee for the last three months to make her stand clear. After the general elections her fortune has soared, but what about the fortune of the "Ma, Mati, Manush" [Mamata‟s political slogan of Mother, Earth, and People]? Their situation remains the same. What Mamata Banerjee is doing is indulging in opportunistic politics.

With the State and the Centre now planning to launch a much stronger attack, do you not think that your movement, as it stands today will endanger the lives of thousands of innocent and apolitical villagers?

The state should think about that. People like Manmohan Singh, [P.] Chidambaram and Buddhababu are responsible for the situation as it stands today. Ultimately, they are the ones responsible for the killings. We still want peace, it is the government that does not.

So are you willing to sit for dialogue with the government for the sake of peace?

You are probably the 210th person to ask me this question. Chidambaram and Buddhababu have clearly said there will not be any dialogue; they have already arrayed their forces for war, and still you people from the media keep harping, „You will all not survive this‟. This is clearly to break the spirit of the common people. I do not understand why you all are continuously asking me this question. It really is not possible for me to provide routine answers to such routine questions. I am standing in a battlefield here.