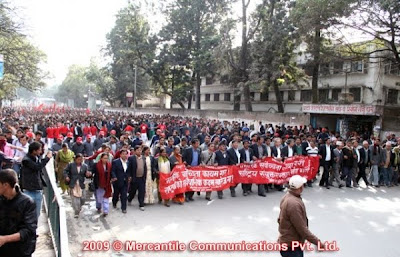 Addressing a mass meeting at the end of the second-phase stir for restoration of 'civilian supremacy' in the capital Friday afternoon, Dahal aka Prachanda said his party will begin third phase of protests if the coalition government failed to address the demands by November 20.

He said that Nepali people have given mandate to the Maoist party to conclude the peace process and write new constitution for the country and that his party is committed to fulfill the duties entrusted by the people.

Dahal said since the current government is operated through 'remote control', it cannot lead the peace process. He accused Nepali Congress of trying to suspend the constituent assembly and impose presidential rule.

Maoist vice chairman and coordinator for second phase stir Dr Babu Ram Bhattarai said his party is ready to end the House deadlock if other parties accept parliamentary discussion on step taken by the president.

Before converging into mass gathering, the party had picketed Singh Durbar, the government's main seat, from early morning today restricting government officials and ministers entering inside