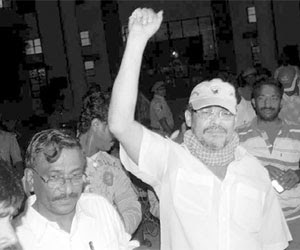 Speaking to media soon after his release from the prison, Tusharkant Bhattacharya reiterated that as long as there was State violence and oppression against the people, the Maoists movement will continue to fight for the depressed classes and those being exploited.

He charged the governments both at the Centre and State levels with terrorising the tribals and forcing them to flee from the forest areas so that the natural resources and mine deposits in the region could easily be handed over to the multi-national companies. “What they are planning now in Chattisgarh in the name of Green Hunt is nothing but a ploy to displace the adivasis. However, the Maoist party with the support of the people will not allow the evil designs of the Centre,’’ he said.

Despite his failing health, the Maoist leader said he would continue to serve the party and would play an active role in the people’s movements. “Protecting the mineral wealth in the forest areas will always be the priority of Maoists,’’ he said.

He said false cases were foisted against him and that he was mentally tortured in the prison. However, he said nothing would deter him. Former CPI (Janashakti) leader Amar was among those who came to receive Bhattacharya at the prison.

Bhattacharya was captured by Bihar Police in a raid on his rented house in Patna’s Dujra locality on September 20, 2007. At the time of arrest, Bhattacharya was looking after the Maoist movement in Uttarkhand, Uttar Pradesh and Uttar Bihar, known as the Triple U in Maoist parlance.

Tusharkant Bhattacharya — resident of Kagaznagar in Andhra’s Adilabad district is one of the leading idealogues of the Maoist Movement in India. He was arrested 2 years ago in September, 2007 from Patna. He is responsible for the infamous Tappalpur Village killings which led to a flight of landlords from 4 Andhra districts
Posted by nickglais on 11/21/2009 10:59:00 AM