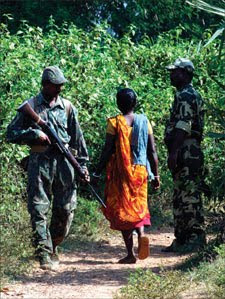 ON THE morning of October 23, 14 adivasi women walked out of West Bengal’s Midnapore jail in crumpled saris. Frail and bewildered, they wondered how they would travel 100 km back to their villages in Lalgarh. The women did not know why they had been arrested, or why they were being released.

The previous night, these women had been the cause of shrill debate across television studios – their release was equated with the famous Kandahar terrorist swap. Maoists had attacked the Sankrail Police Station in West Bengal, killed two officers and kidnapped the officer in charge (OC). These women — “the Naxal prisoners,” India’s own Lashkar-e-Taiba terrorists — were being swapped for OC Atindranath Dutta. A lower court had rejected their bail plea; now a sessions judge in Midnapore had conveniently granted bail.

Then came a piercing outcry: Is the West Bengal Government soft on Maoists? On cue, Chief Minister Buddhadeb Bhattacharya clarified that his government is not weak, that this is a one-off incident, that no such release will ever happen again. Swiftly, Home Minister P Chidambaram distanced himself, saying this was solely a decision of the West Bengal Government. Immediately, Left Front General Secretary Prakash Karat sprung into damage control mode, emphasising his party is indeed against the Maoists. Home Secretary GK Pillai said the swap was unfortunate. Amid the high-decibel rhetoric, no one asked the basic question. Who are these women? What are they guilty of? What is the evidence of their links with the Maoists? Why were they in jail in the first place?

When you see this frenzy over the release of 14 innocent adivasi women – among them a 70-year-old widow – you know there is reason to be afraid. Operation Lalgarh has set off a horrifying blindness, symptomatic of any war zone. There are the troops, there is the enemy; there is nothing in between. Everything else is collateral damage; everyone else, a prisoner of war. When the Centre launches Operation Green Hunt this year, this is what will be replicated on a much larger scale across Jharkhand, Chhattisgarh and Bihar. There will be many more hostages and neither side may be willing to swap.

If you had met the families of these adivasi women before any such swap was imminent, you’d know there is reason to be afraid. A skeletal Rabi Patro is sewing sal leaves into plates; he earns Rs 50 for every 1,000 plates. He cannot afford the journey to Midnapore jail to meet his wife. Dhanaraj Mahato is grumpy. With his wife gone, he has to feed the cows and goats. Tapasi Baske’s afraid her mother-in-law may never return but her immediate worry is the hen eating up her rice. None of these families have the resources to travel to court or engage a lawyer. None of them know that in a land far away, their kin have already been labelled as Maoists; that the basic tenet of a just State – being deemed innocent until proven guilty – has been reversed.

LOCAL HUMAN rights groups say there have been more than 400 arrests in and around Lalgarh since June 2009. The police put the figure at 388, of which they say 88 have direct links with Maoists. The remaining, they say, are connected to “front organisations of the Maoists” such as the People’s Committee Against Police Atrocities (PCAPA). When you begin to examine the evidence, the specific cases against these men and women, a grand charade, a manic witchhunt comes to light. There is a strategy, a pattern. You can be booked for waging war against the State for raising slogans like “Maoist Zindabad, PCAPA Zindabad” at mass protest rallies – rallies you never attended. Arrested as a Maoist for shouting “Run, Kishenji!” while fleeing from the police. The police don’t have to explain how they nabbed you, but missed the much-wanted CPI (Maoist) spokesperson who was apparently in the same crowd. You can be charged for attempting to murder the police with “deadly weapons” such as “brickbats, bows and arrows” though there is no record of police injury. The Maoists could barge into your poultry farm and threaten you to attend rallies and the next day, you could be arrested for “giving shelter to the Maoists”.
Posted by nickglais on 11/10/2009 12:05:00 PM