Bhattarai warns govt against using force during their peaceful protests 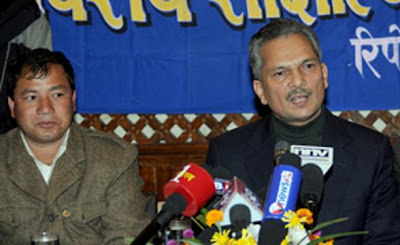 Unified CPN (Maoist) Vice-Chairman Dr. Baburam Bhattarai has warned that any act of repression by the government during their 'Singha Durbar gherao' program will be met with strong retaliation from the party.


Speaking at an interaction program in the capital Wednesday, the Maoist ideologue advised the government against stopping them from entering the prohibited zone to picket the seat of the government.

The government extended the prohibited areas around the Singha Durbar area on Tuesday in view of the Maoists' plan to picket the government administrative center on Nov. 12 and 13.

Bhattarai, who is also the chairman of the party's United National People's Movement Nepal that is organizing the nationwide agitation, said that the Maoists will bring in hundreds of thousands of people in the streets to break the prohibitory orders on that day to picket Singh Durbar.

He assured that the party will exercise maximum restraint to avoid any untoward incident during their peaceful protests.

But if the government resorts to force, we will retaliate, he warned