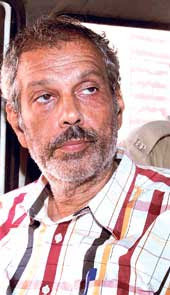 Posted by Rajeesh on November 14, 2009 on Indian Vanguard

Maoists are champions of people’s cause; Expose the reactionary propaganda that Maoists are terrorists!!

As part of their all-round brutal offensive against the CPI(Maoist) and the ongoing people’s war in India, the Sonia- Manmohan-Chidambaram fascist clique at the Centre and the various exploiting class parties in the states, irrespective of their colour, have engaged their lawless repressive state apparatus to eliminate the central and state leadership of our Party. Exactly a month after the arrest of a Polit Bureau member of our Party, comrade Sumit, from Ranchi on August 19, and four months after the abduction and brutal murder of our Central Committee member com Patel Sudhakar, another Polit Bureau member and a senior leader of the CPI(Maoist), comrade Kobad Ghandy, was arrested from Delhi. Comrade Kobad Ghandy had just returned from a trip to the guerrilla zone.

The arrest of comrade Kobad Ghandy is being touted as a big success of the Intelligence officials while it was actually a result of the betrayal by a weak element in the Party who was acting as his courier. He was betrayed by his courier who led the SIB from AP and the Intelligence wing in Delhi to the appointment spot in Bhikaji Cama Place in South Delhi. The police claimed that he was arrested on the night of 20th September, but the actual arrest was made on 17th. The prompt reaction from various democratic and civil rights organizations foiled the plan of the Intelligence agencies and the police officials to torture and murder him as is their usual norm. The CC, CPI(Maoist) hails the efforts made by the various democratic forces in defending the life of comrade Kobad Ghandy and appeals to them to fight against the heinous attempts of the reactionary rulers to implicate him in false cases, to conduct Narco tests and to mentally harass him.

Comrade Kobad Ghandy, who hails from a rich, elitist background, had abandoned everything and mingled with the oppressed masses serving them selflessly for almost four decades. He lived with the unorganized workers, adivasi peasants, and the urban poor and became popular among the oppressed sections of the Indian people. He organized revolutionary activity in Maharashtra during the 1970s and became a member of the Central Committee of erstwhile CPI(ML)[PW] in 1981. He continued as a member of the CC of the merged CPI(Maoist) in 2004 and was elected to the Polit Bureau after the Unity Congress—9th Congress in February 2007. He played a crucial role in bringing out the Party publications in English and was also looking after the subcommittee on Mass Organisations set up by the CC besides other works. The arrest of comrade Kobad Ghandy is a great loss to the CPI(Maoist) and the Indian revolution.

The reactionary rulers were elated by this temporary success and the wily Chidambaram had congratulated the Intelligence agencies for the ‘prize catch’. Like true heirs to George Bush these state terrorists have stepped up their propaganda that the Maoists and the Maoist leader comrade Kobad Ghandy are terrorists. They churn out numbers to show how thousands have become victims of Maoist violence. But the fact is: while the Maoists had punished only the repressive forces of the state, the anti-people feudal forces and the police agents, it is the police, para-military forces and the armed vigilante gangs like the salwa judum that are continuously carrying out a mass murder campaign completely destroying over 800 tribal villages, murdering over 500 adivasis and raping over a hundred adivasi women in Dantewada and Bijapur districts alone. Same is the story in Bihar, Jharkhand, Andhra Pradesh, West Bengal’s Lalgarh and other areas, Orissa, Maharashtra, and so on.

This 21st century breed of Goebbels can never fool the people through their outright lies about the Maoists who live among the people, who live for the people, and who have no other interests than those of the oppressed people. None would believe that the freedom-loving Maoists who are fighting for the oppressed people undergoing countless sacrifices and facing tremendous hardships and brutal repression by the police would terrorise the very same people for whose liberation they have been waging a bitter war against the Indian state. It is a Tata, a Mittal, a Jindal, a Vedanta, a Ruia and
their loyal representatives like Manmohan, Chidambaram, Raman Singh that are terrified by the Maoists who are challenging their exploitation and oppression of the adivasis and the abundant wealth in the vast adivasi belt.

Comrade Kobad Ghandy is a role model to be emulated by the new generation of youth that is being estranged from its own people by the elitist, slavish, anti-people colonial education system and selfish values promoted by the pro-imperialist rulers. Let us unite to fight against the attempts by the Indian state to persecute revolutionary intellectuals, Maoist leaders and fighters like comrade Kobad Ghandy who had dedicated their entire lives for the liberation of the people from the clutches of imperialist, feudal and comprador capitalist exploitation and oppression. Maoists are servants of the people while Manmohans, Chidambarams and Raman Singhs are servants of the imperialists, feudal forces and the lumpen, parasitic, mafia capitalist class. Maoists are fighting selflessly for the liberation of the oppressed while Manmohan Singhs Chidambarams, Raman Singhs and Co are the oppressors spreading terror among the people.