'We Are Going to Spread War Across Turkey': Kurdish PKK Leader Bese Hozat 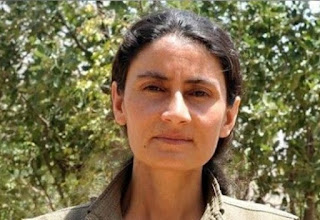 Bese Hozat, the co-chair of the Kurdistan Workers’ Party’s (PKK) umbrella organisation the Kurdistan Communities Union (KCK), spoke to journalist Erdal Er in the Qandil Mountains and warned that the war between the Kurdish group and Turkish state would spread across the country.

Qandil, a mountainous sanctuary and political center better known and more influential than many established states.

The area, located in the Kurdistan Region, north of Iraq, is within the borders of what the PKK calls the Medya Defence Zones; areas controlled by the group’s guerrilla fighters. Many view it like a capital because the Kurdish Freedom Movement is based here and has become an influential force and powerful actor in the Middle East.

Turkey wants to eradicate this force and is using all its political, military, diplomatic and economic might against the Kurds supporting it. With the war in Iraq, Syria, Rojava and Northern Kurdistan [southeast Turkey] and recently the Mosul operation, the world’s eyes have once again turned to Qandil. A busy woman, Bese Hozat took time out to answer our questions.

What is Turkey trying to do in Iraq, South Kurdistan [KRG] and Mosul?

Turkey’s policy is expansionist, sectarian and occupationist. It doesn’t want people to live in peace and together. It doesn’t want South Kurdistan to democratise. It won’t accept that the Yazidis will gain recognition and a political status. And it wants to eradicate the PKK.

But Turkey has said it wants to resolve issues and contribute…

What it’s doing is more important than what it is saying. The reason Turkey wants to participate in the Mosul operation is not to solve issues but to exacerbate them. Its interests lie in this. Its main objective is to make the Sunnis under its control sovereign in Iraq.

Kurds are majority Sunni though…

This doesn’t change matters. Erdogan doesn’t accept the existence of Kurds: Alawite, Yazidi, Sunni, it doesn’t matter to him. Furthermore Erdogan’s policy isn’t to help resolve Sunnis’ problems but to instrumentalise them for his racist, monist and sectarian policies; these policies are primarily against Kurds.

What are you proposing that is different to Turkey?

We vehemently reject sectarianism, nationalism and sexism. We know from Kurdish history that sectarian and nationalist policies have inflicted a lot of damage on the Middle East and its people. Today we are trying to prevent this from happening again. This is why we want to participate in the Mosul operation.

What is the deadlock?

The deadlock is this; just because the majority in Mosul are Sunni does it mean that we have to reject the existence of others? This is what ISIS does. So then what is the difference between Turkey and ISIS? You cannot find a single example of a system based on one belief being a solution. They have only led to a lot of bloodshed. A system based on the rule of a majority belief can only mean blood, massacre, tears and destruction.

How can the Mosul issue be resolved ?

We believe that the solution for Iraq, Mosul and the region lies in the democratic nation model. Sunnis, Shi’ites, Christians, Assyrian-Syrians, Kurds, Arabs and Turkmen live in Mosul. So the issue can be resolved by implementing the principle of equality and not discriminating based on religion, language, race, sect or gender.

Why shouldn’t it be? We have Rojava as an example. An autonomous Shengal (Sinjar) and the Sinjar Resistence Units (YBS) will bring about the democratisation of Mosul post-ISIS. Mosul’s democratisation will affect the whole of Iraq and South Kurdistan. We want the HPG [PKK’s armed wing] and the YBS to participate in the Mosul operation for this reason.

What about Turkey’s existence in Bashiqa?

We view them as an occupant force. They have negated international law and the Iraqi state’s sovereignty to deploy their military in Bashiqa; and they are not heeding Iraq’s calls to withdraw. The Turkish state is also an occupying force in South Kurdistan. This occupation is not independent of the KRG administration. The presence of Turkish soldiers damages Kurdish unity and also targets the gains of Southern Kurds. It is important for the future of our people in the KRG that they struggle against this occupation.

Could you expand on this?

If Turkey is successful in eradicating the PKK their next step will be to eradicate South Kurdistan. The Turkish state sees the Kurds as enemies. It abhors diversity and the idea that Kurds will gain recognition.

Why do the relations between the South Kurdistan administration and Turkey irritate you?

We are not irritated. Of course South Kurdistan can have economic and political relations with the Turkish state. But we cannot accept the South Kurdistan administration green-lighting genocidal policies against the Kurdish people. This is the problematic and damaging aspect of relations we are against.

What do you mean by ‘problematic and damaging?’

Turkey is waging a comprehensive war against Kurdish gains in Rojava. Hundreds of people have been killed. It did this through certain proxies like ISIS, al-Nusra and some gangs within the Kurdish National Council (ENKS). It also did this in Aleppo and Sheikh Maqsoud. Unfortunately certain factions within the KRG are supporting this policy. They are in agreement with a state that is waging a genocidal policy against Kurds. This is a cause of great discomfort amongst Kurds and our movement.

Do you expect an attack on Shengal?

Turkey has plans against Shengal. There are reports it has made an agreement with some local forces. Shengal is one part of Turkey’s Mosul plan. ISIS’ attack and genocide in Shengal was not independent of Turkey.

What will you do if Shengal is targeted?

Is the recent ISIS attack on Kirkuk part of a possible assault on Shengal?

It has become clear that Turkey was behind the Kirkuk attack. Turkey is a source of instability in the region. It is against a solution and peace. It wants to create conflict between different peoples in Mosul and Kirkuk.

Guerrillas are the Kurdish people’s defence force. They will be everywhere they are needed.
Will the war in Northern Kurdistan continue?

Yes, the war there will intensify. We are not the cause of this; the cause is the Turkish state’s plan to genocide the Kurdish people. Turkey wants to take advantage of the region’s conjuncture to eradicate the PKK and complete its 100-year genocide plan.

What do you mean by genocide?

What we are saying is not propaganda; the situation is serious. If the Turkish state’s genocidal plans are not countered and there is no resistance, a genocide like the Armenian Genocide is going to be implemented against the Kurds. The only thing that can prevent this is struggle.

Is this possible in today’s world, will the world remain silent?

Turkey is using Iraq, Syria and the refugee crisis as a threat against Europe and the US so that they remain silent and turn a blind eye to this policy of genocide. Internally Turkey is razing Kurdish cities and towns to the ground, murdering people and suppressing dissidents to create an empire of fear where society is silenced.

The aim is to crush all opposition and eliminate Kurds who are resisting. In this way the state wants to impose a genocide across Northern Kurdistan, like it did in the 1915 Armenian Genocide and the 1938 Dersim Genocide. This is Erdogan and the AKP’s solution to the Kurdish question.

Therefore rather than waiting for a savior, resistance, struggle and victory is the only way.

Are aerial attacks on the Medya Defence Zones continuing?

Are there a high number of deaths in aerial attacks?

Turkey’s exaggerated figures are a part of its psychological warfare. Those figures cannot be further from the truth. Of course we have had losses in aerial attacks, but not like Turkey claims. We are sharing information about losses with public opinion. Our people should not believe in Turkey's psychological warfare.

Do you expect a ground operation on the Medya Defence Zones?

We know that Turkey has a plan to do this. We have preparations against it. If Turkey attacks we will respond. If they come they will see.

If these attacks continue will you engage in actions in Turkey’s cities?

We are struggling against the AKP’s policies of genocide and will continue this. We will not kneel down. Accepting these policies means accepting genocide. The Kurdish people and PKK militants are not lambs to the slaughter.

We are not going to limit the war to Northern Kurdistan, we are going to spread it across Turkey. Everywhere is an area of war for us now.