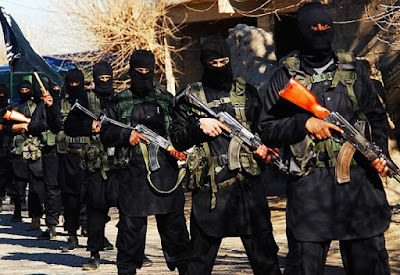 The Islamic State (ISIS) on Wednesday tightened its security measures in the city of Raqqa, in northeastern Syria. According to eyewitnesses and activists, the extremist group has imposed a curfew in the city centre, installed new checkpoints and erected concrete road blocks.
Raqqa serves as a de facto capital of the self-declared Caliphate. Within the city, there has seen a week-long state of alert amongst ISIS jihadists.

As previously mentioned, ISIS militants have fanned out, imposing a curfew in Raqqa. Dozens of people have reportedly been arrested at the newly established security checkpoints for violating the curfew.

While ISIS tightened its internal security, ISIS vehicles arrived in Raqqa, coming from Iraq. According to S Awad, an eyewitness, “More than 20 vehicles crossed the border and entered Raqqa on Tuesday at midnight, carrying ISIS militants and weapons.”

The Islamic State’s new redeployments and repression are likely related to the advances being made by US-backed Iraqi and Kurdish forces. On Monday, allied forces began the battle for Mosul and rapidly progressed towards the Caliphate’s Iraqi capital.

More than 4,000 Peshmerga soldiers were involved in the operation, fighting alongside Iraqi security forces. The Peshmerga soldiers liberated on Monday nine villages in the vicinity of Mosul, in an area measuring approximately 200 square kilometres.

The operation was launched from the towns of Gwer and Khazir and coincided with a simultaneous advance by the Iraqi Army who pushed north from Qayarrah.

Hundreds of Islamic State (ISIS) militants have escaped from Iraq’s Nineveh Governorate, taking the Ba’aj road to Syria. Officials and military officers reported on Tuesday that civilians accompanied the jihadists as the fled west, ahead of advancing Kurdish and Iraqi columns.

The Ba’aj road rarely appears on maps. It is an unofficial roadway created by ISIS, connecting Mosul city in northern Iraq to Raqqa city in central Syria.

On Saturday, dozens of ISIS jihadists arrived in the Syrian border town of Margada along with their families. The jihadists came from positions in Iraq’s northwestern Nineveh Governorate, which have been evacuated.

Local sources told ARA News that more than 90 ISIS militant had made the journey in a staggered convoy. Eyewitnesses reported that the militants were accompanied by at least 25 civilian families, who were reportedly their relatives.