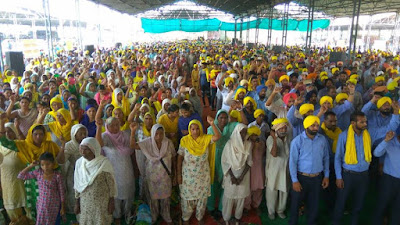 IT SOWS THE SEEDS FOR MANY A FLOWER TO BLOOM.THE VOICES OF LEADERS OF REVOLUTIONARY MASS ORGANIZATIONS EXPRESSED THE VERY ASPIRATIONS OF THE EXPLOITED PEOPLE OF INDIA.

THE SCENE OF THE VENUE ILLUMINATED THE TORCH OF SHAHEED BHAGAT SINGH IN MANNER IT WOULD SPREAD EVERYWHERE.TRIBUTE TO THE PAINSTAKING WORK OF YOUTH COMRADES AND REVOLUTIONARY DEMOCRATIC MOVEMENT OF PUNJAB.

A GREAT FESTIVAL OF THE MASSES WHICH SYMBOLISESTHE LIBERATION OF THE ENTIRE PEOPLE OF INDIA..

MORALLY EXCELLENT EXAMPLE OF PRACTICE OF MLM WITHOUT OFFICIALLY UPHOLDING IT.

On 27th September the Barnala grain market was literally illuminated with the light of Shaheed Bhagat Singh.

The participants thronged in in swarming like beas reminiscent of a small band of soldiers turning into a huge army. or a stream turning into an ocean.

One of the greatest gatherings ever in the history of Punjab Punjab commemorating Shaheed Bhagat Singh took place at the grain market in Barnala on Tuesday September 27th.

The venue was literally illuminated with the torch of Shaheed Bhagat Singh.The People thronged reminsicent of a stream turning into an ocean. 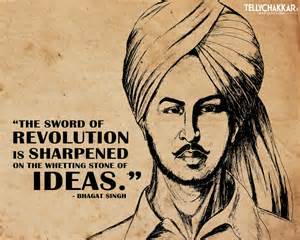 The success of the conference was a tribute to the painstaking grassroots work of the youth in spreading the message of Shaheed Bhagat Singh in contrast to what the ruling class parties propagate.

The speakers emphasized that only with the involvement and struggle of the youth can the landed and landless peasantry emerge victorious in the struggle for emancipation.

They linked the political ideology of Bhagat Singh with the day to day class struggles and issue like suicides,payment of debts,gaining of plots for dalit labourers,minumum wages etc

Although not present the author spoke to comrades Pavel Kussa,Sukdev Singh Khokri and Laxman Singh Sewewla.

The main theme of all the speakers was on the false model of economic development projected by the ruling government of Narendra Modi ,which was morally anti-people and practicing exactly oposite of what Bhagat Singh preached.

The questions of unemployment,caste-repression and land distribution in their view must take Bhagat Singh's perspectives into consideration.

Today the youth,peasants and workers all have many partial demands but only by converting them into the fight for basic political demands could liberation be attained.It is these very basic demands that Bhagat Singh fought for till his death.

The political parties have all questions on their agenda be it unemploymernt or land distribution but simply make false promises to the masses.

The youth should expose the anti-people agenda of the govt in light of Bhagat Singh's teachings.and formulate a pro-peole development model.

They all felt that the even was great succes and played an important role in instilling te political message of Bhagat Singh.What is important is that even the leaders like Nehru,Gandhi and Sardar Vallalbahi Patel betrayed Bhagat Singh in 1947.

Such a gathering will play a major role in inspiring the class struggles of the future .

What is significant is that the state elections are coming soon and parties like B.J.P,Congress or Akali Dal are doing everything possible to divert people from their real issues and making false promises.

Significantly Comrade Sewewal stated that only by the imbibing the lessons of Bhagat Singh and the political involvement of the youth can the dalit labourers be emancipated.

The nefarious pro-globalization policies of the ruling class parties were exposed.It looked as though a red flame was burning within the hearts of the women,youth and peasantry.

The conference will play major role on the question of the people of Punjab demanding a revolutionary alternative during the coming elections.just as Bhagat Singh advocated.Morally Bhagat Singh was the equivalent of a Lenin or Mao for his time.

The political conference took place from 1.00 in the afternoon to 4.30 and in the evening till midnight a series of cultural programmes took place which evoked phenomenal enthusiasm.,

The event further verifies how much grassroots work has been undertaken by forces like Punjab Khet Mazdoor Union and B.K.U Ekta (Ugrahan) and is a tribute to their meticulous struggle.In the whole of India one cannot see a gathering like this commemorating the greatest martyr of our times.

The organizers above all mastered the true language of the masses. 80% of the participants were from the B.K.U.Ekta (Ugrahan) and about 65% youth. 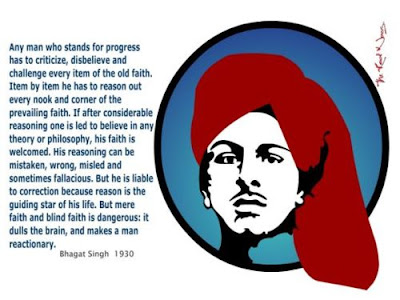 BARNALA: Hundreds of people congregated at the 'Range De Basanti Conference' in Barnala on Tuesday to celebrate the 109th birth anniversary of revolutionary Bhagat Singh.

The participating groups termed the revolutionary's birth anniversary as a celebration. Bhagat Singh was born on September 28, 1907, and was hanged at Central Jail, Lahore, on March 23, 1931.
NBS convener Pavel Kussa said, "After losing employment avenues, the youths of today are wandering aimlessly.

Under such circumstances, they are falling prey to the machinations of various political parties or indulging in drug addiction.

At a time when all options of decent life are ceasing to exist as envisioned by Bhagat Singh and his contemporaries, it is needed that their ideals are adopted get rid of anti-people forces.

"The people of Punjab owe a lot to the martyrs and want their vision to make everybody equal in India to be made a reality.". 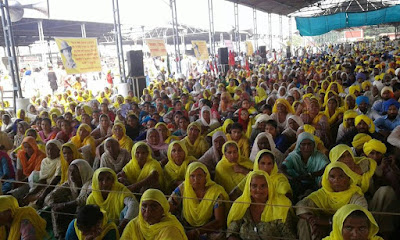