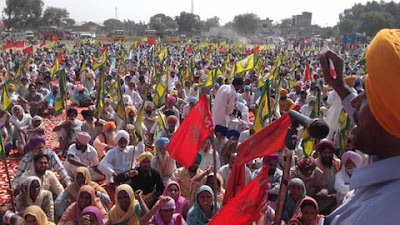 SALUTE HEROIC RALLY OF PEASANTRY AND LANDLESS LABOUR AGAINST FASCIST REPRESSION BY AKALI DAL GOVT ON LANDLESS DALIT LABOUR IN CONFERENCE IN LEHRA GAGA IN SANGRUR ON OCTOBER 21ST..

ERUPTING.UNITY OF REVOLUTIONARY FORCES OF JALOR KHAND JABBAD VIRODHI ACTION COMMITTEE IN CONFERENCE AND RALLY IS A RED LETTER DAY IN THE HISTORY OF THE  REVOLUTIONARY MOVEMENT OF PUNJAB.

On 21st October the Jaloor Kand Jabar Virodhi Action Committee held a conference which terminated with  a rally around the city ending at the State district Magistrate's office...

The gathering comprised the bku-Ekta (Ugarhan) which organized the landed peasantry , the Punjab Khet Mazdur union which organized the agicultural workers and the  Zameen Prapt Sangharsh committee. Particpants  also came from the working class employees section which was encouraging and some fro the All India Khet Mazdoor Sabha of the C.P.I.

1.That 1/3rd right of land pamchayat promised should be awarded to dalits.

2.That all 69 dalit democratic activists are released

3.That all the people responsible for crimes in recent months against the landless dalits should be imprisoned.

Of particular highlighting was the crimes of Akali leader Baban under the leadership of Parminder Dhindsa.who sponsored the criminal goons.

The mobilisation could not reach 8-10,000 as it is the harvesting season of agricultural labourers.

Still it was noteworthy that more than half came from the landed peasantry supporting the struggle of the dalits against tyranny.

What was heartening that almost sections from all the different trends within the revolutionary camp participated.

.A base has to be laid for organized resistance of protracted actions against the nexus of the state machinery with the landlords of the ruling parties

Revolutionaries have to seriously study the dalit or caste aspect and the polarization within the socio-political system.
Posted by nickglais on 10/25/2016 02:12:00 AM