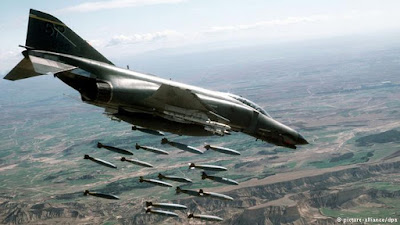 Democracy and Class Struggle see this attack on the YPG as part of US and Russian duplicity towards Kurds and accommodation to Turkey and its "interests".

The Turkish military said its fighter jets hit Syrian Kurdish targets in northern Syria, and killed up to 200 fighters, according to state media.

The jets hit 18 targets in Maarrat Umm Hawsh, a region north of the city of Aleppo, the official news agency Anadolu said.

Quoting the army, the report claimed that between 160 and 200 fighters from the YPG (People's Protection Units) group were killed in the raids on Wednesday night.

A Syrian-Kurdish forces leader, however, said that while Turkish jets and artillery were attacking, no more than 10 fighters had been killed so far.

The Syrian Observatory for Human Rights, a monitoring group, said at least nine YPG fighters were confirmed killed and 26 people were injured in some 20 raids.

Al Jazeera was unable to independently verify the death toll.

The Anadolu report said the YPG had attacked Turkish-backed Syrian rebels. However, the Observatory said it had no information on such an incident.

In August, Turkey launched a ground operation in northern Syria, targeting the Islamic State of Iraq and the Levant (ISIL, also known as ISIS) group and the YPG, and continues to maintain a military presence in the neighbouring country.

The US considers the YPG to be a key force in the fight against ISIL in Syria.

Turkey says the group is an extension of its own outlawed Kurdish fighters - the Kurdistan Workers' Party (PKK) - who have carried out a series of deadly attacks in Turkey over the past year.

Tensions between Turkey and the US have increased over the YPG, but Ankara has repeatedly said it will not allow a "terror corridor" on its southern border and wants to prevent the joining of the Kurdish "cantons" of Afrin and Kobane.

"It will be interesting to see what the United States has to say about the attack Turkey has carried out on the force [the US] sees as effective in fighting ISIL in Syria ," said Al Jazeera's Mohammed Adow, reporting from Gaziantep - a Turkish border town near Syria.

Turkey entered the Syrian war to try and remove ISIL from its border - which last month Ankara said it achieved - while also aiming to halt the westward advance of the YPG.

President Recep Tayyip Erdogan said on Wednesday that Turkey would not "wait for terrorist organisations to come and attack us" during a speech in Ankara.

"These organisations, wherever their activities are, wherever they are nesting, we will go [there]," he said.