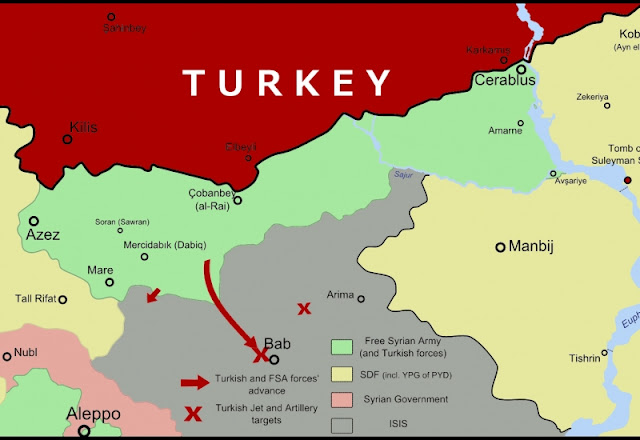 As the attacks by Turkey-backed Free Syrian Army (FSA) affiliated groups on Rojava’s western canton Afrin continue, journalist Aziz Koyluoglu, who is in the region, has reported that the Revolutionary Forces (RF) allied with the Syrian Democratic Forces (SDF) are preparing for an operation on al-Bab.

The “Euphrates Shield” operation launched by Turkey and FSA groups into Rojava-Northern Syria Federation in August recently moved from Marea to the Shaykh Issa and Tal Rifaat areas in Northern Aleppo, which are controlled by the Revolutionary Forces.

This move has been viewed as an effort by Turkey to “suffocate Afrin” while the world’s gaze rests on the Mosul operation. Despite aerial bombardment and heavy shelling, which has killed dozens of fighters and civilians, Turkey backed groups have not been able to make headway in the area and it has been reported that the RF are expected to launch a counter offensive.

Reporting developments from Afrin, journalist Koyluoglu said, “The situation is complicated on all fronts. Recent developments are going to determine the future of Syria and Rojava. Russia, the US and Turkey are all implementing policies that favour their own interests, but the real direction of events is going to be determined by the region’s people.”

‘No advance despite attacks’

The journalist also reported that clashes were concentrated in Marea’s south and that Turkey had sent dozens of armoured vehicles and heavy artillery to the town to fight the Revolutionary Forces. However despite this Turkey-backed rebels had not been able to advance and had suffered severe losses, which could change the balance of affairs on the ground Koyluoglu said.

Assessing the rapprochement and diplomatic meetings between Turkey and Russia and its reflection on the situation in Rojava, the embedded journalist stated: “Discussions between Russia and Turkey are centred on withdrawing the groups encircled [by the Syrian Army] in Aleppo’s east. Turkey wants this and gave Russia some hope about it. They said, ‘If you allow me to enter Jarablus, Marea and al-Bab then I will withdraw the groups in Aleppo.’ This was the bargain and Russia accepted it. But it hasn’t materialised. Al-Nusra, or with its new name Fatah al-Sham, is still in control in Aleppo and has declared it will not withdraw. In fact they have launched a new offensive from Idlib to break the blockade.

This will end the discussion and rapprochement between Turkey and Russia. Russia has allowed Turkey to foray as far as Marea.

But we will see whether they accept this position or allow them to go any further. It looks like this won’t happen because the Aleppo deal hasn’t come to fruition.

The statement by Fatah al-Sham on Aleppo will be the breaking point of Russia’s policy with Turkey.”

US supported the plan

Koyluoglu continued: “Turkey rather than opening a corridor to Aleppo through Marea to break the blockade wanted to lay siege to the Syrian army, however the regime has made a counter-move with a military buildup in Northern Aleppo against this threat.”

The journalist also asserted that Turkey’s offensive was based on two objectives, adding, “They want to prevent the creation of a federative structure by changing the geographical integrity of the area. This is why they are trying to advance in Marea and block the Afrin-Manbij line.

The second objective is to form a corridor between Aleppo centre and al-Zahraa and a passage to Idlib through here. This will also mean the encirclement of the Syrian army. The Nour al-Din al-Zenki Islamist group [backed by Turkey] made this admission when they revealed their plan was ‘besieging the already besieged Aleppo.’”

Plans A, B, C do not have any chance of success

Koyluoglu indicated that this initiative was what Turkey President Erdogan had called “plan B” and said: “Plan A failed.

Turkey couldn’t take part in the Mosul operation. The recent attack on Kirkuk was Turkey’s C plan.
Turkey has put into effect both plans now.

The attacks on the Shahba region are a part of this plan. Neither of these have any chance of success.
The attack on Kirkuk by Daesh (ISIS) was defeated. Plan B being implemented in Rojava has also been routed. Turkey and the groups it is backing wanted to conquer Tal Rifaat and progress to the area controlled by the Syrian regime but this plan has failed.

However there is still the possibility of attacks and not only in the Shahba region; there are preparations to occupy Idlib.”

Koyluolgu also remarked that military preparations had been made in the Afrin Canton and that the autonomous administration had stated they would resist attacks.

The journalist concluded by emphasising Turkey’s military buildup in the region and said that Turkish Special Forces were fighting on the front-line in Shaykh Issa but had been met by resistance from the RF, who were preparing for a counter-offensive that included al-Bab and Marea.