Philippines : According to IBON, the GRP-NDFP talks are the first peace talks in the world to take up far-reaching social and economic reforms spanning the entire economy of a country 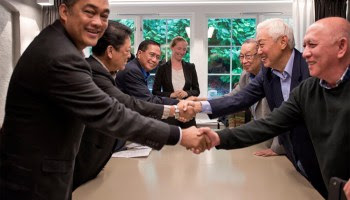 On the eve of the start of the second round of peace negotiations between the Philippine government and the National Democratic Front of the Philippines (NDFP), research group IBON said that the comprehensive reforms the talks will take up are the key to its success. The eventual peace deal will have widespread public and political support because it will directly benefit the majority of Filipinos, the group said, as well as lay the conditions for a sustained peace.

According to IBON, the GRP-NDFP talks are the first peace talks in the world to take up far-reaching social and economic reforms spanning the entire economy of a country. Peace accords with other guerrilla groups have tended to treat social and economic development only in specific sectors or parts of the country, as economic benefits for fighters and some of their immediate rural constituency, or even just narrow inducements to lay down arms.The group said that the Comprehensive Agreement on Social and Economic Reforms (CASER) that is the focus of the second round aims to dramatically improve the welfare of tens of millions of farmers, workers, urban poor, indigenous peoples, and even those in Bangsamoro areas of armed conflict.

The benefits sought are tangible, IBON pointed out. Land will be distributed to farmers for free. Everyone will have jobs or gainful work and wages will be enough to live decently. Education and health care will be free and housing affordable. The agreement is so comprehensive that it even provides for free internet access, among a host of other reforms across the economy.

If concluded, the GRP-NDFP talks will produce the world’s first peace deal addressing the structural economic problems of a country that cause such widespread poverty and underdevelopment. These are ultimately the conditions for armed conflict, the group stressed. IBON added that the peace deal will also outline a clear foreign policy that asserts economic sovereignty towards putting the country on the path of rural development and becoming a real industrial power in the region.

The group recalled the recent rejection in a national referendum of the peace deal between the Colombian government and the Revolutionary Armed Forces of Colombia (FARC).

According to IBON, among the lessons to be learned from this is that the people have to be involved in drawing up the details of the peace agreements from the very beginning and that the conduct of the negotiations have to be communicated to them clearly to get their full support.

The second round of peace talks will be held in Oslo, Norway from October 6-10, 2016. The first round took place last month, marking the resumption of formal GRP-NDFP peace negotiations under the Duterte government after several years of impasse under the Arroyo and Aquino administrations.
Posted by nickglais on 10/06/2016 02:51:00 PM