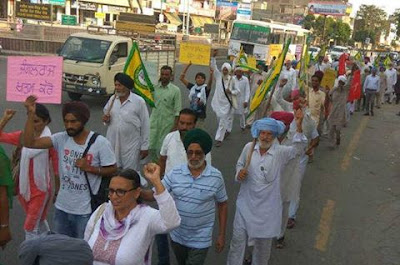 OPPOSE FASCISTIC  REPRESSION ON DALIT LABOURING COMMUNITY IN SANGRUR IN PUNJAB BY GOONS OF AKALI DAL PARTISAN TO THE RICH LANDLORDS.

LONG LIVE THE FORMATION OF UNITED FRONT OF DEMOCRATIC ORGANIZATIONS. .

A major development has taken place in Punjab with the formation of a united front to combat the fascistic repression on dalits in Sangrur.

The landed peasantry will have to play a significant role in uniting with the landless dalits and thus such a front has great significance.

A  rally comprising of democratic organizations was held in Bathinda and in over 40 villages the effigies of the chief minister was burnt in front of police stations..

Actions were virtually sporadic with the  rage burning within the dalit community.

The partisan nature of the state with landlord classes against the dalit landless community has been exposed more than ever before with the recent police onslaught.

The ruling classes strive tooth and nail to whip casteist passion and divided people on these lines.

A report in hindustan times exposes how inbuilt the casteist poison and polarization lies within the society . "JALOOR ZABAR VIRODI ACTION COMMITEE  was formed on October 12th in Ludhiana town. by various democratic and revolutionary organizations against reppression on dalits of jaloor.action commitee .

It gave  a call to organize a protest on 21 october against pre-planned attack on dalits by government-administration-local goons.

Hope  this front will go a long way in creating a platform for organizing mass revolutionary resistance against the fascistic repression of the govt. on the dalit labouring community and a base for further development of movement of landless peasantry.

We must salute the painstaking work of the Naujwan Bhrat Sabha and Zameen Prapat Sangharsh commitee who have literally played a vanguard role in this historic movement.Salute formation of this Front.

REPORT IN HINDUSTAN TIMES Tension continues to prevail at Jhalur village in Sangrur a week after a clash between Dalits and landlords, which left 30 people injured.

Fearing for their life, at least 20 Dalits families have already left the village. The clash took place over cultivation of village common land between upper caste landlords, allegedly supported by local Akali leaders, and Dalits, who are members of the Zameen Prapti Sangharsh Committee.

The village has over 170 Dalit families. Shankar Badra, a Dalit, told HT that members of the upper caste community have stopped selling milk to them and landlords were not allowing Dalits to work in their fields. “We are also not sending our children to school out of fear,” he said.

The Dalits have rejected the three-member probe committee, including Moonak sub-divisional magistrate and superintendent of police (detective), constituted by the government to probe the incident. Sangharsh committee member Gurmukh Singh said the probe panel was formed to hush up the matter and the authorities were backing landlords.

Moonak deputy superintendent of police (DSP) Akashdeep Singh Aulakh, however, rejected the reports of tension in the village and said the situation is fast returning to normalcy. “People who have left don’t want peace in the village,” he said, adding the Dalits were not being discriminated.

The DSP said cross first information reports (FIRs) and attempt to murder charges have been slapped on members of both the parties.

Demanding justice for Dalits, members of the Jamhoori Adhikar Sabha on Wednesday took out a protest march in Bathinda over the ‘atrocities’ on Dalits in Jaloor village of Sangrur and demanded the release of the arrested Dalits. They also demanded action against the accused who assaulted the Dalits.

On October 6, a clash erupted between a Dalit group led by the Zamin Prapati Sangharsh (ZPS) Committee and a few Dalit families of Jhalur village, who were allegedly being supported by an SAD leader and landlord Gurdeep Singh Babban.

Cross FIRs were registered in the incident. In one FIR, 68 members of the ZPS Committee had been booked on an attempt to murder charge and under the SC/ST Act. In the other FIR lodged on similar charges, 18 people were named from the Dalit group that was supported by the landlord.

NK Jeet said, “We will soon come with a detailed report of how the atrocities had been done on Dalits and how they have been tortured. Dalits have claimed that they were ousted from the hospital following which they had to get treatment from a private hospital whereas some people with minor injuries were allowed treatment in the Civil Hospital.

The state government had failed to deliver justice to Dalit families who had fallen prey to atrocities being committed on them. Dalits also revealed that an announcement was made by some people in a gurdwara to assault them whereas the announcers had spread a rumour that Dalits had killed an Akali leader who belonged to the upper class.”

Bagha Singh said, “According to the Punjab Village Common Lands Regulation Act 1961, one third of the cultivable land proposed to be leased is reserved for members of the Scheduled Caste to be given on lease by auction.

The ZPS Committee claims that Jat landlords hoist dummy Dalit candidates for the auction, who bid higher with their help, but the control over the land remains with the landlord.

Therefore, an agitation to wrest the land back has been on since 2014, with the participants including Dalit students, women, and even small peasants of the Jat community.”

Dalits of Malwa belt of Punjab, especially Sangrur district are struggling for their rightful share in panchayat land since 2014 under the leadership of Zameen Prapti Sangharsh Committee and have won important victories.

Ruling class parties, landlords, police and bureaucracy are very much angry at this dalit rising. This year also there have been pitched struggles since June which are continuing till date. Dalits are facing concerted attacks by landlords and the police is acting for the landlords by foisting false cases against struggling Dalits and arresting them besides using force to disperse their gatherings.

In village Jaloor, block Lehragaga, panchayat land of dalit share was wrongly and forcefully taken by landlords through fake auction. Dalits are protesting against this.

They have held dharnas and demonstrations a number of times, but all these protests fell on deaf ears and land was occupied by landlords. Dalits in protest did symbolic harvesting.

On 5th October 2016, landlords attacked their houses, injured men and women and damaged properties. Police instead of taking any action against the landlords, foisted false cases against dalits and arrested them.

On October 4, 2016 a deputation of nearly 50 women went to meet the DC. When they were returning they were detained and threatened by police and let off in the evening. On october 5 ZPSC organised a dharna at Lehragaga.

When dalits were going for dharna, landlords snatched their flags and threatened them. Some of them were present near dharna site, along with weapons. After the dharna leaders of ZPSC told the police that they feared an attack and it was duty of police to protect them. Police assured protection.

When dalits reached village Jaloor along with dalits from other villages, landlords, who were waiting, attacked them injuring a large number of men and women.

The aged mother of ZPSC leader Balwinder Jaloor was attacked with sharp edged weapons, the shop of his father was looted. When this attack was going on police was standing on the outskirts of the village. When the district leadership of the organization called up the DSP he did not respond.

At eleven o clock in the night, SDM and DSP said that they are in the village to rescue the people from other villages and asked people to come out.

When they came out they were arrested.
SDM said that he had fixed a meeting of both sides to sort out the matter at 10 AM next day.

But early in the morning landlords again started beating up people in the very presence of police.

When leaders of the organization contacted the SDM and said that on the one hand you talk of meeting and sorting out the matter, on the other hand a carnage is going on in the very presence of police, he expressed his helplessness saying that the DSP was not answering his call.

Most of the media too did not go to the spot but published the police version. None from the administration came to the rescue till the time of writing of this report.
Posted by nickglais on 10/15/2016 11:09:00 AM