UK: WHAT CAN BE DONE? BY HARRY POWELL 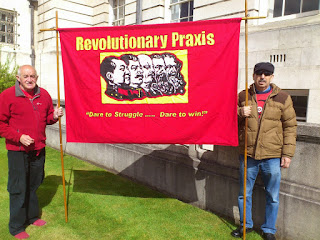 With another reactionary Tory government in office people are wondering what can be done to beat off further oppression and exploitation of the great mass of the people. Here are some answers which won’t work:

· Reclaim the Labour Party for socialism. Most leftists have been banging on about this for decades. The more they try to radicalise Labour the more reactionary it becomes. It is a futile project.

· Form a new left wing party. Left Unity and the Socialist and Trade Unionist Coalition have been standing in elections and getting poor results. They put forward reformist, social democratic platforms. Their line is that if only we elect the right people than everything will be all right. They fail to recognise that we have the wrong system, a fake system of "democracy" designed to keep the rich rich and make them richer. It’s the system which needs changing.

· Carry on with the old campaigning methods. Demonstrations, marches, public meetings, petitions have all been tried as ways to resist cuts and austerity and it hasn’t worked. The politicians, both national and local, simply ignore these sort of protests. To simply uncritically carry on in the same old way is mindless and useless.

SO WHAT SHOULD WE DO?

We should start taking direct action to get at the politicians and those who carry out their dirty work for them. We can:

· Disrupt IT systems—government and business are heavily dependent on IT. Already people have hacked into their systems. This should be taken further.

Engaging in these sort of actions would give people the courage and confidence to pose real challenges to our rulers and their lackeys—and to go further.

We should also begin to build a revolutionary movement in Britain. There are some organisations which claim to be "revolutionary" but none of them are credible, e.g. Socialist Workers Party, Socialist Party, etc. because in practice they peddle reformist politics.