India: Kobad Ghandy, jailed for being a Maoist, goes on hunger strike to protest harassment by authorities 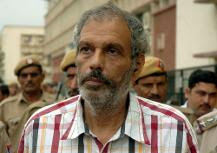 Senior citizen political prisoner Kobad Ghandy called off his hunger strike on Thursday evening as the authorities shifted him to Jail no. 3 where he was previo...usly lodged before being shifted to jail 8, last Saturday.

This time while being shifted he was helped by the jail staff unlike his previous experiences where he had to drag everything on his own. As per our lawyer who visited him today he looked cheerful and was happy with the development.

Meanwhile the sessions court has ordered to the jail supt to observe caution and care. And also in case if they shift him to any other prison then they should continue to give all the facilities that was given to him in the previous cell.


Kobad Ghandy, who was arrested in Delhi in 2009 on charges of being a member of the banned Communist Party of India (Maoist), has been on hunger strike in Tihar Jail since Saturday to protest what he has described as harassment by the authorities.

Sixty eight-year-old Ghandy said that the jail authorities had transferred him three times between different wards of the jail  over the past nine months in what he viewed as a bid to target his failing health. He says that he suffers from a heart problem, blood pressure, a slipped disc, arthritis and a kidney condition, among other illnesses.

He has been booked under the Unlawful Activities (Prevention) Act and Indian Penal Code for a variety of offences, including impersonation, cheating and forgery. He is facing trial in 20 other cases around the country.

Ghandy had been arrested from Bhikaji Kama place in Delhi in September 2009. At the time of his arrest, he had been undergoing treatment for a kidney ailment. His lawyers alleged that he had been illegally detained and tortured for four days before he was officially shown as arrested.

In March, an additional sessions judge in Delhi had directed the jail superintendent to facilitate medical treatment for the ailing Ghandy.

Ghandy was born into a wealthy Parsi family, which owned an ice cream factory, among other businesses. He studied in Doon School and Mumbai’s St Xavier’s College before heading to London to study chartered accountancy. It was in London that he first saw Marxist groups fighting racism and got attracted to the ideology. After returning to India in the 1970s, he began working with tribals and the rural poor in various parts of the country. He was a member of the Maoist People’s War Group but claims he was expelled from it in 1987.

In a letter to the director of the National Human Rights Commission in November 2011, Gandhi appealed that he should be treated like a political prisoner and not a convicted criminal., “In the entire chargesheet there is no charge of violence," he said. "There is no charge of any criminal activity or criminal intent, which is normally accompanied with charges under the UAPA. I have merely been put behind bars for my views and my work amongst the poor, who comprise 80% of our people."

He added, "Incidentally the views (Maoist or Marxist) are not banned and freely available!”

This is the full text of Kobad Ghandy's statement, released on June 1.


“I am 68 years and I have spent five and a half years in Tihar with the Delhi case nearing completion. Though routine (3 to 5 months) transfers of High Risk Ward prisoners have been going on for 4 years, I was subjected to this only from August '14. This is the third time in 9 months. Earlier, jail transfers were done only as a form of punishment.

I have a heart problem, B.P., slip disc, arthritis, spondylitis, kidney, and numerous other health problems – all of which are increasing specifically after August '14.

While transferring we have to carry our bags ourselves (some 10-15 kg) go through set of detailed searches of all items, made to hang around at the jail gates for 4-5 hours waiting for the transport, packed like sardines with baggage into a single van and taken to the new jail gate.

In the two more detailed searches, again to carry all items ourselves to the ward etc. One has to go through mulaaza (medical check) done for a new entrant. Then a scramble for cells, with the later arrivals getting the worst. Then at least 2-3 days goes in cleaning the filthy cell and arranging the baggage (no help given).

In the new jail all medical treatment gets interrupted, medical diet and other permissions have to be applied anew as also the bed and western toilet. This can take from a few days to months. Also, the Vodaphone facility has to be started anew. Barely has one settled in, and adjusted with the new lot of criminals (some of whom can be pretty nasty) when the next transfer comes and the whole process repeated.

The May 30th transfer [was] done in the midst of examination for a heart problem at the GB Pant Hospital.

Since the 2012 High Court order to Tihar to take better care of Senior Citizens (above 65), I have been applying to be put in the Senior Citizens' ward, or given similar facilities in the High Risk ward – but to no avail. On the contrary, while at first they never transferred me, they resorted to this since Aug '14, obviously as a method of harassment and to destroy my health.

As all the appeals, on both humanitarian and legal grounds have been ignored, I, as a last resort, have had to go on an indefinite hunger strike since the last transfer on May 30th.”