Solidarity with Luis Jalandoni from comrades in Wales 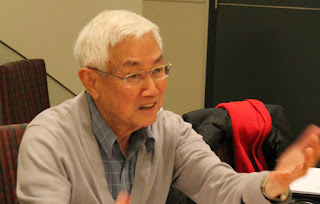 Yr Aflonyddwch Mawr in Wales calls for the end to the harassment of comrade Luis Jalandoni in the Philippines and we remember his message of support he gave to us in our struggle in 2013 when we started our Red Flag Ceremony in Merthyr here.

That message at that time gave us much needed  support and encouragement and we at Yr Aflonyddwch Mawr will do all we can to support Luis Jalandoni and the Philippine people today in their struggle.


Since the 1990s, Luis Jalandoni the chairperson of the Negotiating Panel of the Nhational Democratic Front of the Philippines has visited the Philippines a number of times for peace consultations and family visits under the protection of the Joint Agreement on Safety and Immunity Guarantees (JASIG) . He met and conversed with Presidents Ramos, Estrada and Arroyo.

Also since the 1990s, Jalandoni has acted as the Chairperson of the NDFP Negotiating Panel and as authorized representative of the NDFP, including the CPP and NPA, in facilitating the safe and orderly release of personnel of the Armed Forces of the Philippines (AFP) and the Philippine National Police (PNP) in the custody of the NPA as prisoners of war.

In sharp contrast to previous regimes, the Aquino regime has emerged as the worst violator of the JASIG by harassing Jalandoni with an invalid and improperly served subpoena and threatening to arrest and imprison him on trumped up charges of nonbailable common crimes, such as “kidnapping and serious illegal detention of four named policemen (captured by the NPA on July 10, 2014 in Surigao del Norte and released on July 29, 2014) and violation of R.A. No. 9851 (Crime against Humanitarian Law and other Crimes against Humanity”.

The Aquino regime is the most malicious of all regimes by using its representatives (like DILG Secretary Mar Roxas and Nani Braganza) to seek the release of the aforesaid policemen with the help of Jalandoni on humanitarian grounds and now hurling against him false charges of common crimes as aforementioned. Defense Secretary Gazmin and OPAPP Secretary Deles were with Secretary Mar Roxas during the safe and orderly release of the aforesaid policemen.

It is reprehensible that the Aquino regime is acting viciously and maliciously by violating the safety and immunity guarantees that protect Luis Jalandoni and by misrepresenting as a crime the facilitation done by Jalandoni to help realize the humanitarian act and goodwill measure of the NDFP in causing the release of the four policemen and seeking to improve the atmosphere for the resumption of formal talks in the GPH-NDFP peace negotiations.

It is unfortunate that the Aquino regime is making a vicious and malicious attack on the NDFP and the person of Jalandoni exactly at a time that he and I have just recommended to the NDFP Executive Committee to give permission to the NDFP Negotiating Panel to undertake exploratory talks prior to formal talks, despite the recent outburst of Aquino against the NDFP and the undersigned.

In order for the GPH and NDFP to engage in exploratory talks, as urged by the Royal Norwegian Government as third party facilitator and the many peace advocates, the Aquino regime should respect the JASIG and allow the safe passage of Jalandoni to his negotiating post and office in The Netherlands. Thus, the exploratory talks will proceed and not be disrupted by petty-minded and malicious obstructions.