URGENT NEWS UPDATE : HIGH COURT SET TO RELEASE DR GN SAIBABA ON BAIL FOR MEDICAL TREATMENT IN DELHI ACCORDING TO REPORT IN TIMES OF INDIA

FREE DR GN SAIBABA NOW HIS ARREST AND IMPRISONMENT IS AN OUTRAGE AGAINST JUSTICE AND DECENCY. 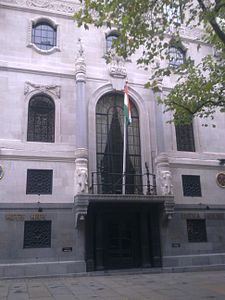 Join the picket at the High Commission of India, Aldwych, London , WC2B 4NA
From 1pm on 28th June 2015
Dr GN Saibaba, a professor of Delhi University and a versatile democratic rights champion was clandestinely abducted on 9th May 14 by plain-clothes Indian policemen. Since then, charged under the draconian anti-terror law the ‘Unlawful activities Prevention Act’ (UAPA), he has been kept under solitary confinement in a dark cell of Nagpur Central Prison in the Indian State of Maharashtra.

Dr Saibaba, who is wheelchair bound with 90% disability, has been in the forefront of democratic rights movements across the Indian subcontinent. He campaigned tirelessly against ‘Operation Green Hunt’ - the Indian State’s war on the poorest of the poor of India, such as Dalits, Adivasis and peasants of Central and Eastern India, who are struggling to safeguard their lands, forests and rivers from being grabbed by the mighty and powerful  multi-national corporations – both foreign and Indian – in the name of ‘development’. For questioning the model of this so called ‘development’, Dr Saibaba is incarcerated. Expression of one’s views on political and socio-economic issues is not a crime but a very basic democratic right granted by the Indian Constitution to all its citizens. Perhaps Dr Saibaba’s only “crime” is that he stood in solidarity with the sons and daughters of the soil, who are on the verge of extinction, thanks to the corporate assault on their lives and livelihood.

Dr Saibaba suffers from a heart ailment and degeneration of the vertebrae for which he needs constant expert medical attention. After his incarceration, his health has seriously deteriorated in the prison. The Indian State has ensured that Dr Saibaba’s bail application was rejected thrice. The trial has not started even after a year, and the authorities are denying him the necessary medical attention, which suggests that the Indian State is slowly letting Dr GN Saibaba’s health deteriorate to point of no return. Imprisoning a 90% disabled violates the provisions of the Code of Criminal Procedure, the Persons with Disabilities Act, and the UN Conventions. This is just a glaring example of a complete travesty of justice which happens far too often in the Indian subcontinent. There are 300,000 prisoners waiting for trial in the Indian jails, languishing for years without legal access, majority of them hailing from the most deprived communities.

We appeal to all intellectuals, lawyers, students, workers and trade union activists of Britain and Europe to condemn the incarceration of Dr Saibaba and thousands of many others by joining the Campaign for the Defence and Release of Political Prisoners.
Indian Workers Association, GB (Central Organising Committee)
Campaign Against Criminalising Communities (CAMPACC), UK
Tohum Cultural Centre – London
International Campaign for Release of Political Prisoners 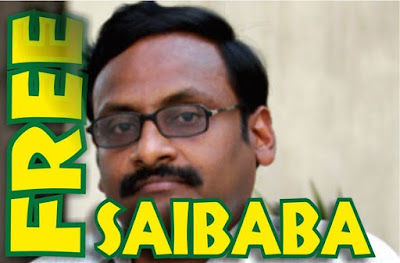 I am not sure if my husband will come out of prison alive: Professor Saibaba’s wife

Vasantha, wife of Delhi University professor Saibaba, says his health is failing for lack of access to basic facilities after being jailed for alleged Maoist links. Vasantha at her home on the university’s North Campus. (Source: Express photo by Oinam Anand)
Written by Aditi Vatsa | New Delhi
In the one year since her husband has been incarcerated, A S Vasantha has got to visit him only five times. They have been communicating mostly with letters. In one, he wrote, “I feel like boiled flesh being cooked in a pressure cooker.”

Vasantha’s husband, Delhi University English professor G N Saibaba, was arrested on May 9 last year for alleged Maoist links. He has been kept in solitary confinement in an anda cell at Nagpur central prison. “At the time of his arrest, Sai was 90 per cent disabled due to post-polio paralysis. Now, his condition has deteriorated to such an extent that only his right hand is working. I am not sure if he will come out of prison alive,” she said.

Saibaba, who was suffering from high pressure and a heart ailment until last year, has developed stones in both kidneys and the gall bladder. “Sai’s left hand is barely functioning and his backbone has been dislocated. These ailments have crippled his body. Because of the heat and lack of medicine, he has fainted several times and his nose and ears often bleed,” his wife said.

Professor Saibaba. Taking cognisance of his health, Bombay High Court last week pulled up the prison authorities for “working blindly” and treating Saibaba “like an animal”. The court directed them to allow Saibaba’s brother and wife to accompany him to a hospital of his choice.

In jail, Saibaba has allegedly been struggling to get access to basic facilities. “For 72 hours since he was arrested, they did not provide him access to a toilet or relieve himself elsewhere. His wheelchair broke and he could not operate it himself,” Vasantha said. “Until recently, we were not allowed to provide him things like books and fruits. We have fought several battles to get small things done — meeting him for more than a couple of minutes, providing him a wheelchair. They treated him like a piece of luggage, lugging him around from prison to court. When the wheelchair could not enter the cell, they would pick him up and throw him inside.”

In April, when Vasantha reached the intensive care unit of a hospital in Nagpur to see her husband, she said she found a policeman with an AK-47 pointed towards her husband. He was sitting on one side of his bed while a drip stand stood on the other side.

“He is an accused, not a criminal. At that point, he could not even have moved on the bed without help. Is this how you treat a person who has spent his entire life working for human rights, raising a voice for indigenous people?” she said.
- See more at: http://indianexpress.com/article/india/india-others/i-am-not-sure-if-my-husband-will-come-out-of-prison-alive-saibabas-wife/#sthash.8pxIsPKV.2b1xnRrV.dpuf
Posted by nickglais on 6/26/2015 03:04:00 AM