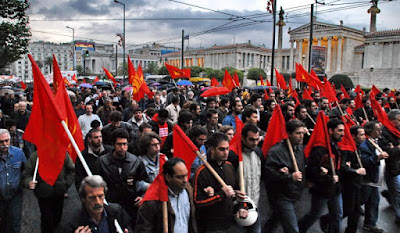 Democracy and Class Struggle says this statement below by Communist Party of Greece does not take account of the hard work and position of the revolutionary Left pole in Syriza and the success it has had forcing the derailment of current negotiations by the Greek Government and the calling of a referendum as a new base for a Plan B for Greece which includes default and leaving the Eurozone and Greece having control of its own currency.


The position of Stathis Koulevakis and Costas Lapavitsas of Syriza have been extensively reported in Democracy and Class Struggle as well as position of Communist Organisation of Greece within Syriza.


We recommend you study the work and activities of these comrades in Syriza.


The KKE falsely poses that the old plan of Syriza will be endorsed if there is a No in the referendum and is blind to the fact that even the old plan was under very serious attack from revolutionary pole in Syriza prior to ending negotiations.

A default and leaving the Eurozone is a most likely result of a No Vote in Greece  this is confirmed by European Union and  is  not some return to same old bankrupt Syriza Reformist Plans.

"So whether the Greek government likes it or not, and apparently it doesn't, the President of the European Commission, Jean-Claude Juncker has said that Sunday's referendum is a vote on whether Greece will stay in the euro".

The KKE is blindly sectarian in calling for staying on the sidelines in the referendum and should be reaching out to the revolutionary Left in Syriza and calling for revolutionary unity in struggle and exit from the Euro..

We have already forecast that real world events caused by the referendum will bypass the reformism of Tsipras and Varoufakis and new revolutionary leadership will be needed in Greece - cannot the KKE at this late hour break with it sectarianism and unite with all revolutionary forces in Greece as the final outcome will be decided by activists on the streets of Greece and not by bystanders.

The poll, conducted between June 28-30 and published in the Efimerida ton Syntakton newspaper, showed 54 percent of those planning to vote in Sunday's referendum would oppose the bailout against 33 percent in favour.


P.S. we also note a similar position to KKE has been taken by KKE ML


As is well-known, the government of the “left” and in essence social-democratic SYRIZA party and of the “rightwing” nationalist party ANEL, in an attempt to manage the complete bankruptcy of its pre-election commitments, announced a referendum for the 5th July 2015, with the only question being whether the citizens agree or not with the proposed agreement, which had been tabled by the EU, IMF and ECB and concerns the continuation of the anti-people measures for a way out from the capitalist crisis, with Greece remaining in the euro.
The coalition government’s officials call on the people to say “no” and make it clear that this “no” in the referendum will be interpreted by the Greek government as approval for its own proposed agreement with the EU, IMF, ECB, which in its 47+8 pages also contains harsh antiworker-antipeople measures, with the aim of increasing the profitability of capital, capitalist “growth” and the country’s remaining in the euro. As the SYRIZA-ANEL government admits, which continues to extol the EU, “our common European home”, the “European achievement”, this proposal of theirs is 90% identical to the proposal of the EU, IMF, ECB and has very little relationship with what SYRIZA had promised before the elections.
Fascist Golden Dawn, together with the parties of the coalition government (SYRIZA-ANEL), took a position in favour of a “no” and it also openly supported the return to a national currency.
On the other side, the rightwing opposition ND, social-democratic PASOK that governed until January 2015, together with POTAMI (in form a party of the centre, in essence a reactionary party) took a position in favour of a “yes” to the barbaric measures of the Troika, which they state will be interpreted as being consent to “staying in the EU at all costs”.
In reality, both answers lead to a yes to the “EU” and capitalist barbarity.
During the session of the parliament on the 27/6, the governmental majority of SYRIZA-ANEL rejected the proposal of the KKE that the following issues be placed before to the judgment of the Greek people in the referendum:
With this stance, the government demonstrated that it wants to blackmail the people into approving its proposal to the troika, which is the other side of the same coin. That is to say, it is asking the Greek people to consent to its anti-people plans and to burden them with its new anti-people choices, either via a new allegedly “improved” agreement with the imperialist organizations, or via an exit from the euro and a return to a national currency, something which the people will be called on to pay for again.
In these conditions, the KKE calls on the people to utilize the referendum as an opportunity to strengthen the opposition to the EU, to strengthen the struggle for the only realistic way out from today’s capitalist barbarity. The content of this way out is: RUPTURE-DISENGAGEMENT FROM THE EU, UNILATERAL CANCELLATION OF THE DEBT, SOCIALIZATION OF THE MONOPOLIES, WORKERS’-PEOPLE’S POWER.
The people, through their activity and their choice in the referendum, must respond to the deception of the false question posed by the government and reject the proposal of the EU-IMF-ECB and also the proposal of the SYRIZA-ANEL government. Both contain barbaric anti-people measures, which will be added to the memoranda and application laws of the previous ND-PASOK governments. Both serve the interests of capital and capitalist profits.
The KKE stresses that the people must not choose between Scylla and Charybdis, but must express, with all means available and in every way, their opposition to the EU and its permanent memoranda in the referendum. They must “cancel out” this dilemma by casting the proposal of the KKE as their vote into the ballot box.
Posted by nickglais on 6/29/2015 01:07:00 PM