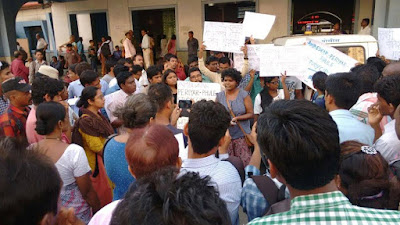 “ APSC was created as an independent student body on 14th April 2014, by a group of students from IIT M to promote Ambedkar-Periyar thoughts and to initiate debate on socio-economic-political and cultural impacts which affects common mass with in academic fraternity”.

Due to the complaint from the right wing students of IIT, Ministry of HRD has directed the IIT do an inquiry on this particular matter. In the complaint letter to HRD says “ some of the controversial posters and pamphlets which have been pasted and distributed all over the IIT Madras.

They are also trying to create hatred against the Honourable PM and Hindus”.

In their FB page, APSC write that there have been number of attempts from the part of the administration to control their activities in the campus and to change the name of their group by stating that “ Ambedar and Periyar” are some politically motivated names and needs to be replaced by some apolitical names.

“APSC is engaged in propagating Ambedkar and Periyar thoughts, in helping depressed castes and the caste Hindus to realize the evilness of caste based discrimination taking place in modern India and expose the ideology functioning behind such discrimination.

When we talk about the hierarchical caste structure existing in Indian Society, inevitably we end up talking about the present pathetic condition of peasants and labourers.

There are a number of sociological studies that will bear us out when we say that caste based discrimination is still very strong in our society, that caste based associations can leave some with privileges that add up throughout their lives while those that are excluded face powerful social barriers to their attempts to improve their social and economic status.

We have only been discussing these issues with an aim to make a common platform for all students in spite of their caste and creed so as to dismantle the evilness of caste barriers.

However, even in 2015, our activities are seen to be too radical by the religious right.

Our pamphlets do not have any material that would surprise a sociological or political scientist.

Yet, the institute has taken these complaints seriously and has chosen to derecognise our organisation.” explains the students from APSC.

Radical Study Circle TISS is a study circle that received similar threats from the castiest students groups and administration of TISS. RSC strongly condemns the moves of IIT Madras administration against propagating Ambedkar and Periyar thoughts, in the name of “ controversial activities”.

We support the activities of APSC and uphold their right to propagate Ambedkar and Periyar thoughts, and conduct programmes and write pamphlets. 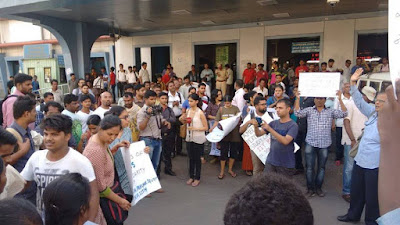