India: Sum and substance of a real Opposition a Critique by Asit Das of Shiv Visvanathan 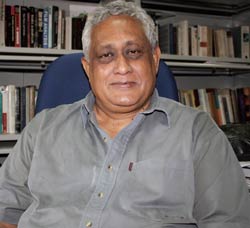 Anti Communist Liberalism, funded by the think tanks of imperialism, has spawned its bootlicking comprador intellectuals in the third world.
One such intellectual is Shiv Vishwanathan, who is so blind in his anti marxism, and so arrogant by the equally servile followers who pamper his ego, that he even doesn’t have the secondary school knowledge of what is left/right/secular/communal.
His knowledge of history is so poor that he doesn’t really understand pre and post cold war political theories.
It is amusing to know that, how a well known social scientist has such a poor knowledge of history. It is really shocking to know that Shiv Viswanathan reduces the concept of left and right to cold war, that is between 1945 to 1991, is it a sleight of hand or sheer ignorance. As far as I know the term “Left” and “Right” emerged in the after math of storming the Bastille in Paris in the Year 1789.
He is so star struck by ruling class politics, that when Aam Aadmi Party swept the Delhi assembly polls in February. In an edit page Article in Hindu, he declared that the AAP to be the New left of India.
That was absolutely stupid political observation. In  fact AAP is another corporate sponsored stooge of the Indian Ruling Classes. He really doesnt know the difference between the social democrats and the left.
Or he wouldnt have called absolutely copted outfits like CPI and CPM as left

Being a pawn of imperialist cold war propaganda against the left, he is so mentally retarded that, even after the collapse of the Berlin wall. When there is no apparent threat to world imperialism, anti communism has got so deeply ingrained into his blood and thought process, that he still carries on anti left propaganda on behalf of his imperialist masters.
Amidst growing poverty, destitution and ravages of wars. These comprador intellectual imposters conveniently, perched in private universities, using access to the Media. Distort the realities about social movements.
In the attached edit page article in hindu Date June 1, 2015. Shiv Vishwanathan paints an abjectly distorted and false picture about the lefts role in various social movements.
In the article “Sum and substance of a real opposition”, Shiv Vishwanathan just utters a white lie about the left vis a vis social movements. In the above mentioned article, this anti left American plant Shiv Vishwanathan has written that the left had no role in social movements like Narmada, Baliapal etc, which is not only a white lie, but also extremely scandalising.
Lets start with Baliapal a heroic resistance movement against the proposed, National missile testing range at Baliapal area of Balasore district in Odisha. Com Gananath Patra, Dr Naryan etc who were  politically,ideologicaly, and organisationally trained by the then united cpiml, and they played a stellar role in Baliapal resistance movement.Baliapal was a logical stop of naxalbari

I think that anti revisionist Marxism-Leninism is of the utmost important. I don't think Maoism is a higher stage, and Enver Hoxha's legacy and championing of Stalin is of the utmost importance. In India, there are also strong ML pro Albania parties, as there are in Greece (KKE). It seems to me that the Indian Maoists are not a proletarian movement, and their Maoist based tactics and strategy won't win. There is a massive working class in India, and it is they who must lead the revolution. I am also not sure that the Shining Path of Peru or the Nepalese Maoists were proletarian revolutionaries, but a mix of petit bourgeois leadership with peasant support.