Xi Jinping - The rise of yet another Princeling 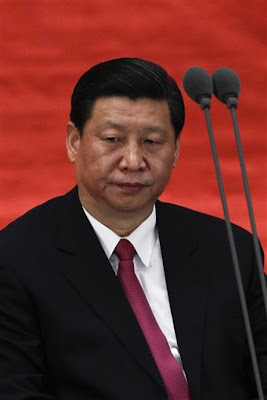 China's ruling Communist Party will hold a congress to appoint a new generation of central leaders from November 8, the official Xinhua news agency said on Friday, citing the decision of a Politburo meeting.

At the 18th Party Congress, President Hu Jintao, Premier Wen Jiabao and other long-standing leaders will give up their main party posts, making way for new leaders likely to be led by current the Vice President Xi Jinping, who is virtually certain to replace Hu as top leader.

The handover of state posts will then be formalized at the annual meeting of parliament, probably in March next year, when Xi is likely to be appointed state president and Li Keqiang named the new premier.

Xi and his siblings are the children of the late Xi Zhongxun, a revolutionary fighter who helped Mao Zedong win control of China in 1949 with a pledge to end centuries of inequality and abuse of power for personal gain.

That makes them“princelings,” scions of top officials and party figures whose lineages can help them wield influence in politics and business


The Wealth of Xi Xingping -

Most of the extended Xi family’s assets traced by Bloomberg were owned by Xi’s older sister,Qi Qiaoqiao, 63; her husband Deng Jiagui, 61; and Qi’s daughter Zhang Yannan, 33, according to public records compiled by Bloomberg .

Xi Xing ping has interests which include investments in companies with total assets of $376 million; an 18 percent indirect stake in a rare- earths company with $1.73 billion in assets; and a $20.2 million holding in a publicly traded technology company.

The figures don’t account for liabilities and thus don’t reflect the family’s net worth.

Prices of the minerals used in wind turbines and U.S. smart bombs have surged as China tightened supply


Democracy and Class Struggle has been exposing the toxic character of rare earth mining in China and especially it use in production of  of so called "Green" Windmill technology.

Now the future President of China's family makes money from this toxic stuff  - not a good omen for the ecological future of the the People of China.

For ideas from inside China on an alternative path to Neo Liberalism read :


In 1997, the World Bank published a long report "China 2020" calling for privatization of public owned enterprises and further liberalization of market. There was very little dissent from the Chinese people; in fact, very few of them knew what was going on in the policy making circles. The later history suggests that the Chinese government followed the advice from the World Bank very closely. Not only had the bureaucrats privatized almost all the public owned enterprises, they also provided "market solution" to education, health service and residential housing issues.


Recently, the World Bank and the research institution under the Chinese State Council published a new report "China 2030". This report gives basically the same prescription as 15 years ago. But the reception is different this time. In the World Bank news conference, Du Jianguo, an independent scholar stood up and protested against the structural reform doctrine advocated by the World Bank. He condemned the report as "poison" and demanded the World Bank to leave China. This protest was reported by several independent media and received enormous support from the online communities.


Interestingly enough, just a short while ago, the authoritative People’s Daily published an editorial calling for further reform while acknowledging the potential oppositions as "trivial critics". In the Chinese context, "further reform" in the mainstream media means neoliberal reforms like privatization and marketisation. This article attracted lots of critique from Marxists and the left wing in general, the scale of which is very unusual in the last 20 years.


All these widespread oppositions to the market reform give us a clear signal: the Chinese people are now explicitly hostile towards neoliberalism (even though not all of them have even heard of this term). There are several major reasons worth mentioning. First of all, we "have been there". The last wave of neoliberal reform has laid off millions of workers and destroyed millions of families. The marketisation of education, health service and residential housing made the life of the working class miserable. Second, the leftist movement has grown much stronger since 1990s. Several large leftist websites are more and more visible in public discussions and all of them explicitly oppose the reform plans from the World Bank and the central government. Many grass-root worker/peasant organizations have come into being and they are in nature anti-neoliberalism.

Last but not least, neoliberalism is in crisis all over the world. The recent economic crisis refreshes the memory of those Chinese people whose mentality remained at the "end of history" more than 20 years ago.


These oppositions and discussions gave birth to a People’s Proposal on China’s future development. The first draft was written by a writer on one of the largest online forums in China. Red China website quickly edited them into a concise version. After that, people have been enthusiastically discussing the proposal all over the Internet and have been adding other things. The China Study Club in UMass Amherst (which I belong to) collectively translated the Red China version into English to give people a sense of what the proposal looks like. This achievement is definitely a milestone in the working class movement in China in that for the first time in the recent three decades so many people are consciously questioning the whole program of the ruling class and have begun discussing what they want. The proposal does not use any Marxist terms, nor does it mention socialism, but everyone can see where it is heading towards.


A SIXTEEN-POINT PROPOSAL ON CHINA’S REFORM

1. That the personal and family wealth of all officials be publicised and their source clarified, and all "naked bureaucrats" be expelled from the Party and the government. ("Naked bureaucrats" refers to those officials whose families live in developed countries and whose assets have been transferred abroad, leaving nothing but him/herself in China.)


2. That the National Congress concretely exercises its legislative and monetory function, comprehensively review the economic policies implemented by the state council, and defend our national economic security.


3. That the existing pension plans be consolidated and retirees be treated equally regardless of sector and rank.


4. That elementary and secondary education be provided free of charge throughout the country; compensation for rural teachers be substantially raised and educational resources be allocated on equal terms across urban and rural areas; and the state assume the responsibility of raising and educating vagrant youth.


6. That the proportion of state expenditure on education be increased to and beyond international average level.


8. That heavy progressive real estate taxes be levied on owners of two or more residential housings, so as to alleviate severe financial inequality and improve housing availability.


9. That a nation-wide anti-corruption online platform be established, where all PRC citizens may file reports or grievances on corruption or instances of abuse; the state should investigate in an openly accountable manner and promptly publicise the result.


10. That the state of national resources and environmental security be comprehensively assessed, exports of rare, strategic minerals be immediately cut down and soon stopped, and reserve of various strategic materials be established.


11. That we pursue a self-reliant approach to economic development; any policy that serves foreign capitalists at the cost of the interests of the Chinese working class should be abolished.


12. That labour laws be concretely implemented, sweatshops be thoroughly investigated; enterprises with arrears of wages, illegal use of labour, or detrimental working condition should be closed down if they fail to meet legal requirements even after lawfully limited term for self-correction.


13. That the coal industry be nationalised across the board, all coal mine workers receive the same level of compensation as state-owned enterprise mine workers do, and enjoy paid vacation and state-funded medical service.


14. That the personal and family wealth of managerial personnel in state-owned enterprises be publicized; the compensation of such personnel should be determined by the corresponding level of people’s congress.


15. That all governmental overhead expenses be restricted; purchase of automobile with state fund be restricted; all unnecessary travelling in the name of "research abroad" be suspended.


16. That the losses of public assets during the "reforms" be thoroughly traced, responsible personnel be investigated, and those guilty of stealing public properties be apprehended and openly tried.