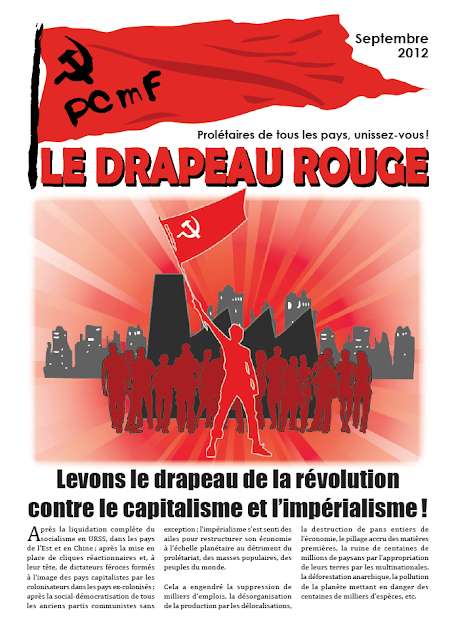 After the complete liquidation of socialism in the USSR, in Eastern Europe and China after the introduction of reactionary cliques, and at their head, fierce dictators formed in the image of the capitalist countries by the colonizers in former colonies, after the social-democratization of former communist parties all without exception imperialism felt pressure  to restructure its economy on a global scale at the expense of the proletariat, the masses, the peoples of the world .

This has resulted in the loss of thousands of jobs, disruption of production relocation, destruction of swathes of the economy, increased looting of raw materials, the destruction of hundreds of millions of peasants by the appropriation of their land by multinationals, uncontrolled deforestation, pollution of the planet endangering hundreds of thousands of species, etc..

On the political level, there is the strengthening of the bourgeois state apparatus, the gradual establishment of a fascism that dare not speak its name, the modern fascism, because there are more great revolutionary parties to threaten the power of the bourgeoisie.

The spirit of conciliation within the capitalist system has become the rule of the Left parties, left-wing official, labor conciliator "together."

The crisis of imperialism has resulted in a reorganization of international imperialism, that is to say, a struggle for the redivision of wealth and power between different markets. The inter-imperialist contradictions grow.

The example of Syria is particularly revealing when the fight is mainly between the "old" imperialist (USA, Europe mainly) and new (Russia, China mainly). The object is clearly the struggle for oil through increased influence on the geographic area of ​​the Middle East.

But "where there is oppression, there is resistance"!

The crisis of imperialism has also had a direct impact on the development of the struggle of the proletariat and the masses worldwide.

These struggles include several categories:

Their strategic goal of communism. In this sense, they are the highest form of anti-imperialist struggle.

They aim to apply the principle of self-determination. They are opposed to imperialism, but when they are not led by the Communists, they lead to the coming to power of the national bourgeoisie who makes a deal with imperialism and revolution prevents building of socialism.

3. Uprisings in the Arab countries against watchdogs in Africa

In the absence of communist leadership, these uprisings lead to the ability of manipulation by  imperialism and to retain or to conquer in their interests, in one form or another.

However, the masses learn in the fight because we have to revolt and realize the power they have. This creates the conditions for the development of communist parties to boost the anti-imperialist line involving the people against imperialism, comprador-bureaucratic class and the feudal classes.

Peaceful movements like the "outraged" and "# Occupy" refuse policy directions and fall into reformism. However, in some countries like Spain, it has resulted in the formation of neighborhood committees opposing evictions for example. These movements took different forms in different countries and had uneven development. Some aspects are fair and communists must rely on these aspects to advance the most advanced.

Crisis that took effect as the mass closures of factories and companies in the imperialist countries, labor strikes and other professions have developed. On the other hand, the reduction of public spending states in the field of education, that is to say, the privatization of education has also resulted in the development of students' struggles.

The most recent example is the student strike in Quebec has grown due to government repression. This develops the objective conditions under which the communists can and must advance the construction and consolidation of the Party.

For renters, the weakening of job security and the rising cost of living has a direct impact on the ability to pay rent and / or find decent housing. On the other hand, depending homebuyers credit are facing the same difficulties.

Small farmers dependent on credit under pressure monopolies are also endangered by the crisis. Communists must take this reality to expand and consolidate the camp of allies of the proletariat.

7. Struggles for environmental protection, against fascism and repression against racism and for equality between women and men, for the freedom of the press, the right of prisoners to education for all and all for the right and access to health care, etc..

Reductions in public spending, democratic freedoms and maneuvers of the ruling classes and parties populist and fascist groups "divide and conquer" accentuate the struggle for the conquest and defense of democratic rights and the improvement of life. These struggles can just move the mass movement that communists must conquer direction.

The advanced Popular uprisings and wars

The advanced popular uprisings and wars will shake the world capitalist system. Their development depends directly on the role that the Communists play.

There are now several types of movements:

These uprisings must be coordinated on the basis of minimum anti-imperialism:

Those Arab countries should be coordinated with respect to common features of cultural (Islam) and language (Arabic).

Those Asian countries, because it is in this region that unfold (India, Philippines) or preparing wars led by popular Maoist communist parties (Bhutan, Bangladesh) and where the parties are in training (Pakistan, Sri Lanka, Indonesia and China).

Those of South America, because a war is led by the popular PC Peru, there are many Maoist parties in preparing training people's war, which moreover linguistic unity (Spanish, Portuguese).

Those of black African countries, which generally can be coordinated on the basis of linguistic grouping (French, English, Portuguese).

Those of Europe as imperialist countries that are facing specifically to the common European policy, led alternately by the governments of the left or right, guaranteeing the perpetuation of the capitalist system.

Those, more generally, the imperialist countries who must fight against their own imperialism.

Fascism is a process underway in all countries of Europe, a process that made the two Maoist parties currently in Europe (France and Italy), defined as a specific form of fascism in our time in constant development.

Modern fascism is characterized by destruction of all social benefits, submission to the process of globalization and its consequences (deindustrialization imperialist countries, job losses) that produce democratic uprisings against the governments in both the left or right to confirm the rise of fascism and modern movements and parties of the extreme right. In Europe and more widely in the imperialist countries this process is underway.

The current uprisings in the Arab countries in particular and despite their limitations, are a leap forward for the labor movement and popular worldwide, a step towards the formation of Maoist communist parties, especially in Tunisia and Morocco.

The need for training of Maoist communist parties in European countries is becoming increasingly urgent and raises the need to consolidate those claiming through the Maoist principle of unity-struggle-unity.

For the democratic uprisings in Arab countries and in Europe, are a first step, become revolutionary uprisings, it is imperative that Maoist communist parties are built:

To affirm the necessity of protracted people's war in all types of countries.

For the establishment of the dictatorship of the proletariat without step in the imperialist countries.

To establish, in the oppressed countries of popular democracy in several classes under the leadership of the working class (the first form of the dictatorship of the proletariat) which is followed without interruption the construction of socialism.

To deepen the dictatorship of the proletariat by the continuous expansion of proletarian democracy in all spheres of life (economics, politics, culture, education, etc.).

To plan production and transform the global superstructure to achieve communism.

To illuminate the path of revolution without forgetting that it is the masses who make history and must take in hand, guided by the party, the work of emancipation, which can not be achieved and stabilized by workers all nations themselves.

Long live the struggle of the oppressed peoples of the world!


Democracy and Class Struggle says the views of the French Maoist Party should form the basis for discussion amongst European Comrades on the basis of unity struggle unity.

We would welcome a discussion on the points raised by French Comrades.