President Gonzalo's 20th Anniversary of his Speech from the Cage 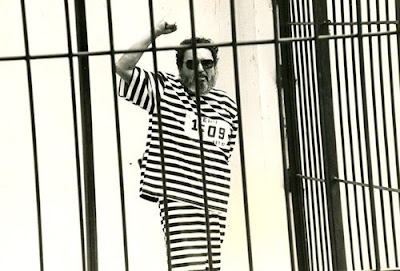 Speech from the Cage


Comrades of the Communist Party of Peru! Combatants of the People's Guerrilla Army! Peruvian People!

We are living historic moments, each of us must be clear that this is the case, let us not fool ourselves. In these moments we should mobilize all forces to confront difficulties and continue accomplishing our tasks and conquering our goals, successes and victory! That is what we must do.

We are here as children of the people and we are struggling in these trenches, it is also about combat, and we do it because we are Communists, because here we defend the interests of the people, the principles of the party, the People's War. That is why we do it, we are doing it and will continue to do it!

We are here in these circumstances. Some think this is a great defeat. They are dreaming and we tell them to keep on dreaming! It is simply a bend, nothing more, a bend in the road. The road is long and we shall arrive. We shall triumph. You shall see it. You shall see it.

We should continue the tasks established by the III Plenum of the Central Committee. A glorious Plenum. You should know that these accords are already being implemented and that will continue. We shall continue applying the IV Plan of Strategic Development of the People's War to Conquer Power, we shall continue developing the VI Military Plan to Build the Conquest of Power, that will continue, that is our task. We shall carry it out because of what we are and because of the obligation we have with the proletariat and the people.

We believe that the l8th century was a very clear lesson. Think about this. There was a dominator. It was Spain and where did that bloodsucking domination bring us? To a very deep crisis, as a consequence of which Peru was divided. From there come the origins of today's Bolivia. It is not our question but facts.

Fine, the last century, English domination. Where did this take us in it's rivalry with France? To another big Crisis: 70 of the past century. The result? War with Chile. We must not forget it. And what happened? We lost territory. Our nation suffers defeat despite the blood shed by heroes and the people. We must learn from this!

The 20th century. How are we doing? In the 20th century we are dominated by imperialism, principally North American, this is real, everyone knows it. And where has it bought us? Without remembering the l920's, here and now, to the worst crisis of the entire history of the Peruvian people.

Learning the lesson of past centuries, what can we think? Once more the nation is at risk. It can easily be lost, and by interests. This is the situation, this is where they have brought us. But we have a fact, a Peruvian revolution, a people's war, and it is, and will continue to advance. Where have we gotten with this? To a strategic equilibrium. And we must understand this well. It is strategic equilibrium which solidifies itself in an essential situation.

Things being that way, let us think of the danger that the nation, that the country, can be divided, that the nation is at risk. They want to dismember it, they want to divide it. Who wants to do this? As always, the imperialists, those who exploit, those who rule. And what should we do? What is our task now? It is appropriate that we push forward the people's liberation movement and that we develop it through the people's war because the people, always the people, have been the ones who defend the country, who have defended the nation.

Finally now, listen to this. As we see in the world, Maoism is marching unstoppably to lead the new wave of world proletarian revolution. Listen well and understand. Those who have ears, use them. Those who have understanding -- and we all have it -- use it! Enough of this nonsense. Enough of these obscurities. Let us understand this. What is unfolding in the world? What do we need? We need Maoism to be incarnated and it is being incarnated and that this generate communist parties to manage, to lead this new great wave of the world proletarian revolution that is coming
.
Everything they told us, the empty and silly chatter of the famous "new age of peace." Where is it now? What about Yugoslavia? What about other places? Everything became politicized, that is a lie. Today there is one reality, the same contenders of the First and Second World War are preparing a Third World War. We should know this and we, as the children of an oppressed nation, are part of the booty. We cannot consent to this! Enough imperialist exploitation! We must finish with them! We are of the third world and the third world is the base of the world proletarian revolution, with one condition, that the Communist parties brandish and lead! That is what we must do !

We believe the following. Next year will be the one hundredth anniversary of the birth of Chairman Mao. We must celebrate these l00 years and we are organizing it with the Communist parties. We want a new manner, a celebration which will be the conscious comprehension of the importance of Chairman Mao in the world revolution and we shall begin the celebration this year and we shall finish it the next. It will be a grand process of celebration. I want to take advantage of this opportunity to salute the international proletariat, the oppressed nations of the world and the Revolutionary Internationalist Movement.

THIS IS WHAT I WANT.

TO COMPLETE THE TASK WELL!


THE PEOPLE'S WAR WILL INEVITABLY WIN!


WE SALUTE FROM HERE THE FUTURE BIRTH OF THE PEOPLE'S REPUBLIC OF PERU!


WE SAY: GLORY TO MARXISM-LENINISM-MAOISM. AND FINALLY WE SAY: HONOR AND GLORY TO THE PERUVIAN PEOPLE.

President Gonzalo Leader of the Party and the revolution, continuer of Marx, Lenin and Chairman Mao Tse-tung.
Posted by nickglais on 9/25/2012 10:38:00 AM

there is a two line struggle in the world today, which divides everyone. 'The New Synthesis of Communism and residues of the past':

this is by the Revolutionary Communists from Mexico, and gives powerful arguments for revolution and for the NEW SYNTHESIS. please check it out, as Democracy and Class Struggle have been wrong about Nepal, and now is putting forward wrong views about Chairman Gonzalo and his line. Only BOB AVAKIAN was right.

Chairman Gonzalo is an Eagle Bob Avakian is a Fly