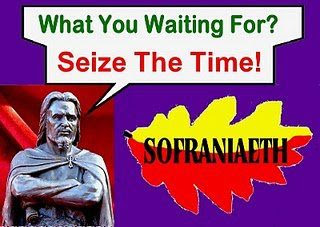 Happy Dydd Glyndŵr Day to Everyone! Don't forget to get your Glyndwr flag out this morning to fly throughout the day out of your windows if you do not have a flag pole - unless you are coming to the Dydd Glyndwr Rali at Pontardawe of course, if so, bring it with you. See the film in the link below which will remind you all of where the flag was flown last year. I'm confident that I can add plenty more photos to this film after today! 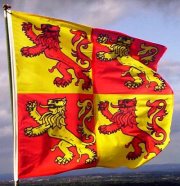 Many people, not just patriots, will be aware that Embassy Glyndŵr has been to the fore in promoting Hanes Glyndŵr and with our Gwaith Glyndŵr, have carried out many initiatives to ensure that our greatest of national heroes is  recognised in a number of practical ways such as advancing 16 Medi as 'Dydd Glyndŵr', the wearing of the Glyndŵr Ribbon and the flying of Baneri Glyndŵr on this and other days as and when people so wish throughout the land. I do not want to take up space now in repeating a long list of our achievements when such are recorded on our blog: Owain Glyndŵr Communicates and in our films on youtube. Now we set forth in a new positive political directions which will be made public at Pontardawe this Sunday 16 Medi 2012: 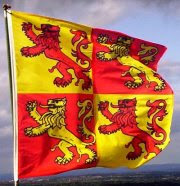